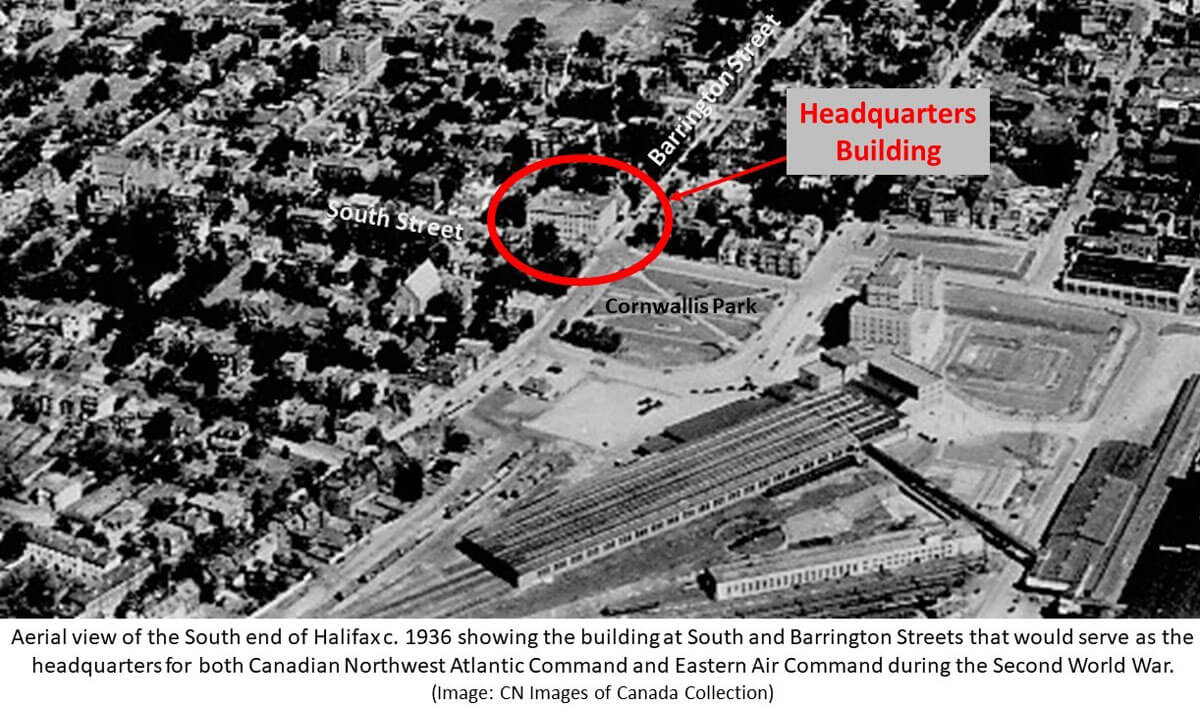 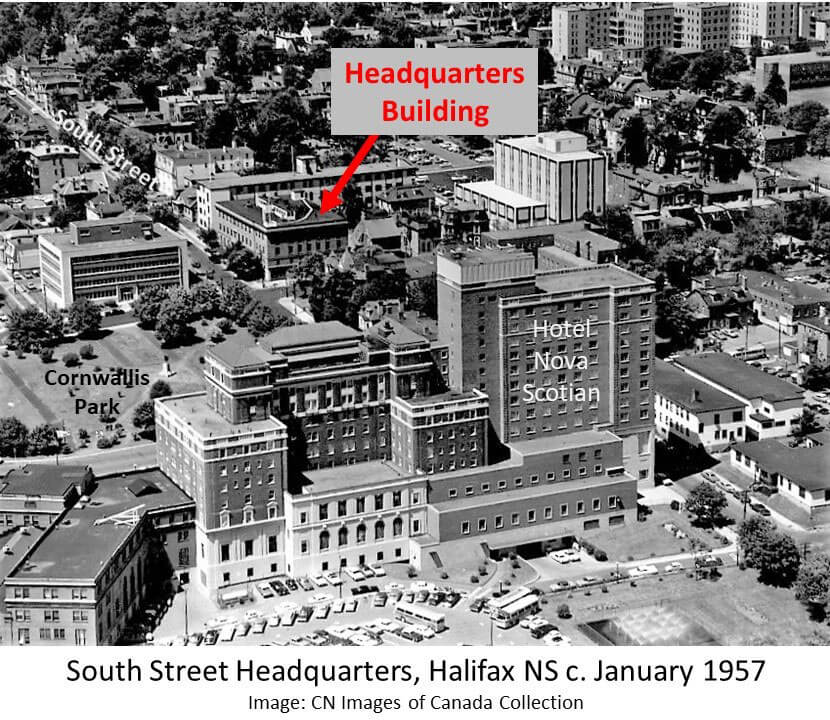 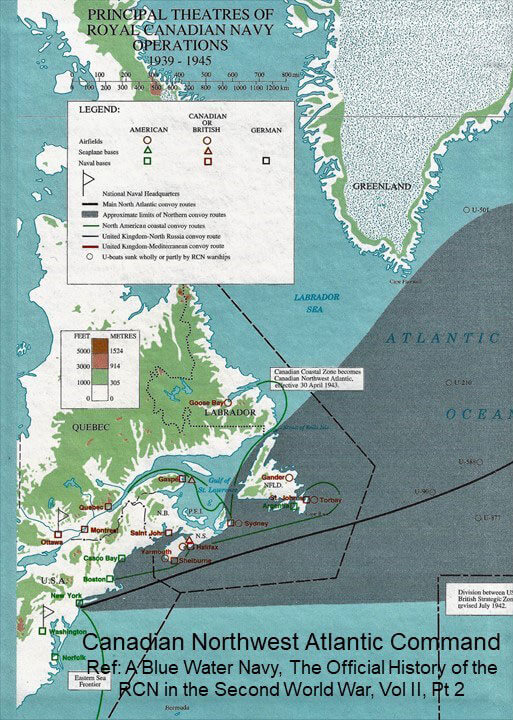 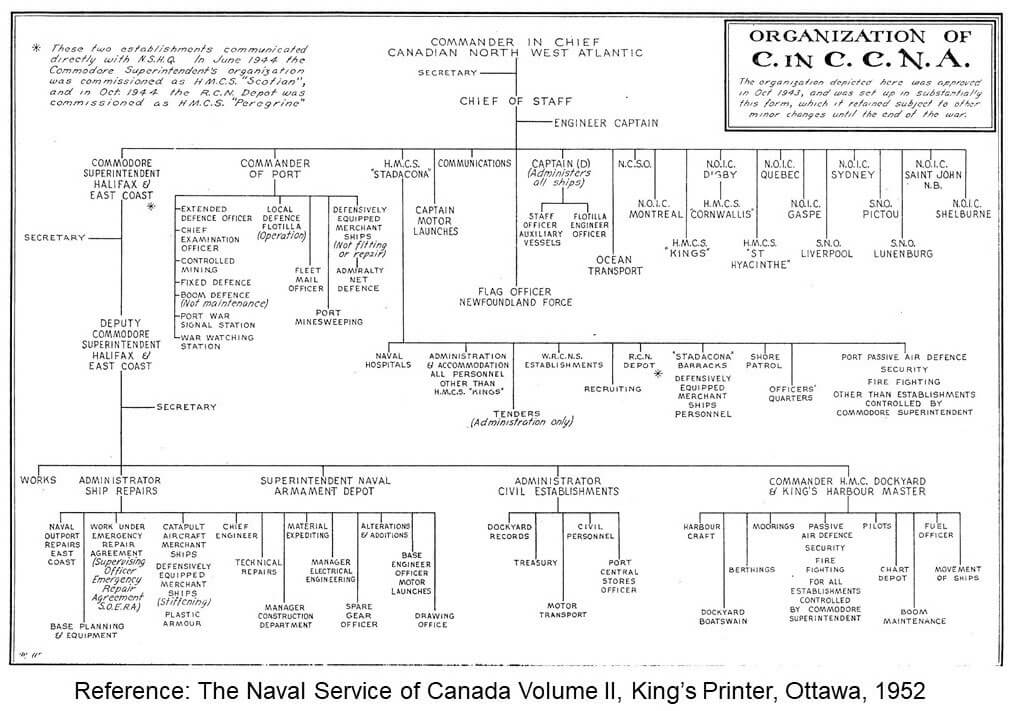 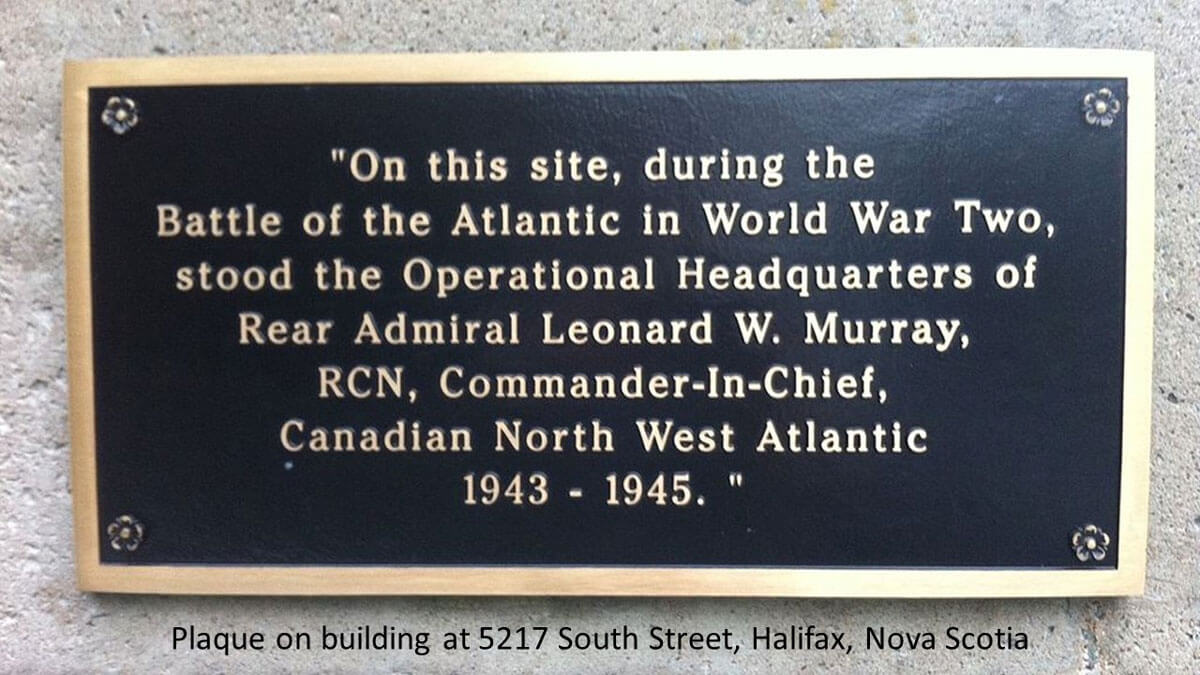 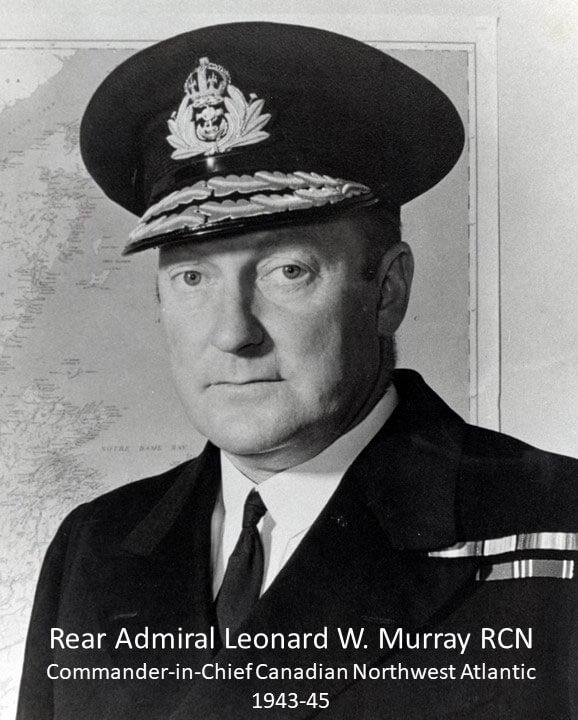 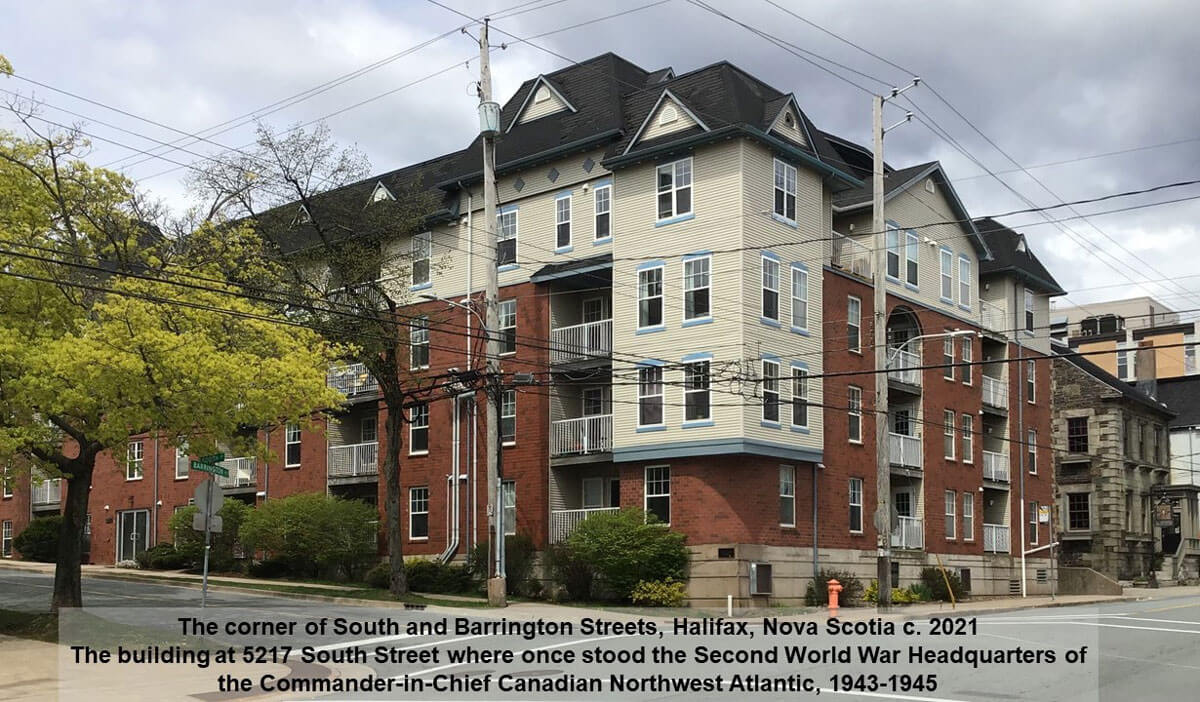 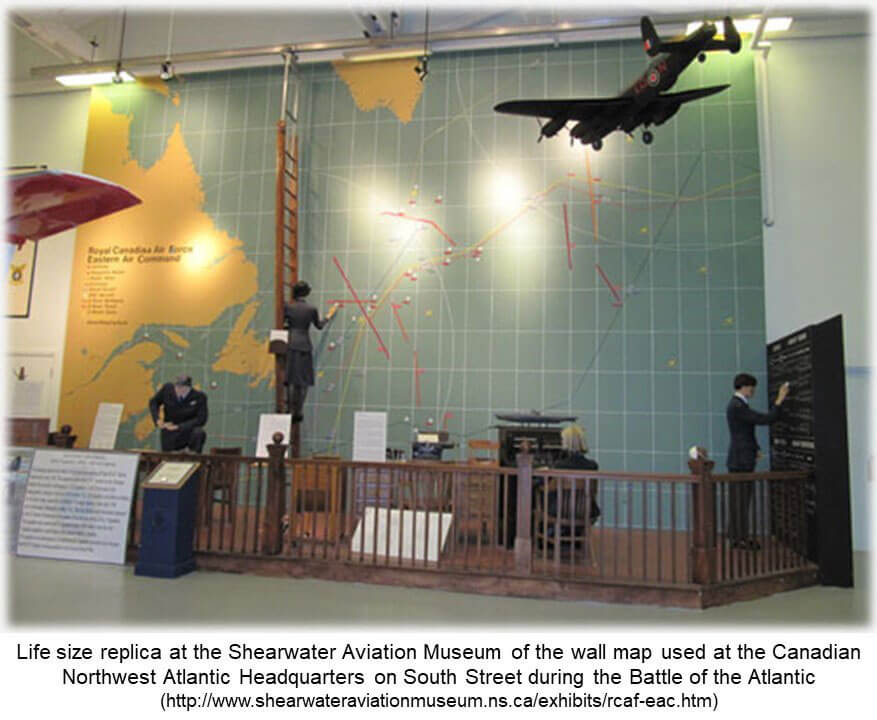 The Eastern Air Command of the Royal Canadian Air Force was formed on 15 November 1938. Its headquarters was in Halifax, located in a building on South Street, on the Northwest corner of its intersection with Barrington Street. During the Second World War (1939-1945) Eastern Air Command oversaw fighter, reconnaissance and operational training squadrons as the RCAF command and operational group headquarters for Eastern Canada and the Atlantic Coast, including Newfoundland (at that time Newfoundland was still a Dominion governed by the United Kingdom) and in the Gulf of St. Lawrence.

As the Battle of the Atlantic wore on throughout the Second World War, the Allies determined that anti-submarine operations in the region would be better coordinated by adopting a British system whereby command and control of all anti-submarine forces, naval and air, was exercised by one central authority. Accordingly, the Canadian Northwest Atlantic Command was established on 30 April 1943 to exercise operational control over all air and surface escorts in the Allied theatre of operations west of 47°W and north of 40°N, including Newfoundland.

The headquarters for the new Command was set up in the same facilities occupied by Eastern Air Command on South Street, and was under the command of Rear Admiral Leonard W. Murray, Royal Canadian Navy, designated as Commander-in-Chief Canadian Northwest Atlantic. The building housed a combined Operations room with an up-to-the-minute plot of U-boat positions, convoys, escorts and air patrols covering the Northwest Atlantic, as well as offices and communications links with Naval and Air Force headquarters in Ottawa and with operational units. Barracks, messes and administrative support for CNA HQ was provided at RCAF Station Gorsebrook, a few blocks west of the headquarters. RAdm Murray exercised operational control over all area naval forces and had operational direction over all maritime patrol aircraft, exercised through his deputy, the Commander of Eastern Air Command, Air Vice-Marshal G.O. Johnson. This included American anti-submarine forces based in Newfoundland, and British forces operating in the area.

Canadian Northwest Atlantic Command was significant as it was the only Allied theatre of operations in the entire Second World War to be commanded by a Canadian. It was a highly successful arrangement, contributing significantly to the Allied victory in the Battle of the Atlantic and, in turn the War itself. It also marked the first time that American air forces came under direct Canadian operational control, setting an important precedent for the Cold War continental air defence command and control relationship between Canada and the United States that continues today as the North American Aerospace Defence Command (NORAD).

RAdm Murray’s appointment as C-in-C CNA wrapped up on 6 September 1945 after the end of the Second World War, and the Command was disbanded. Eastern Air Command remained but was disbanded in March 1947 with the creation of Maritime Air Command, which operated from the South Street headquarters until it too was disbanded during the unification of the services in 1966. The newly created Maritime Command (MARCOM) of the Canadian Forces thereafter continued to use the building as an adjunct to its main headquarters in HMC Dockyard; it housed elements of the Deputy Chief of Staff (Personnel and Training), the Naval Reserve Headquarters, the naval newspaper Trident, the Nova Scotia International Tattoo and others, and is remembered by those who served there as having been a maze of rooms and corridors. The building was finally vacating when the new MARCOM headquarters was constructed in the Dockyard in 1984.

A life size replica of the wall map from the headquarters’ Operations room during the Battle of the Atlantic can be seen at the Shearwater Aviation Museum in Dartmouth, complete with the original wooden bannister-surround and plotting ladder. The old headquarters on South Street was demolished in 1998 and replaced with the apartment building that today stands at 5217 South Street. A plaque at the corner of the building closest to the intersection of South and Barrington Streets commemorates the site as having been the location of RAdm Murray’s Second World War Canadian Northwest Atlantic Command Headquarters.