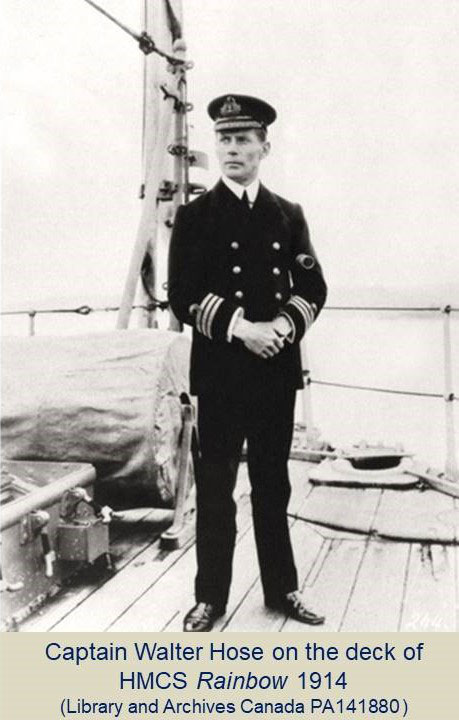 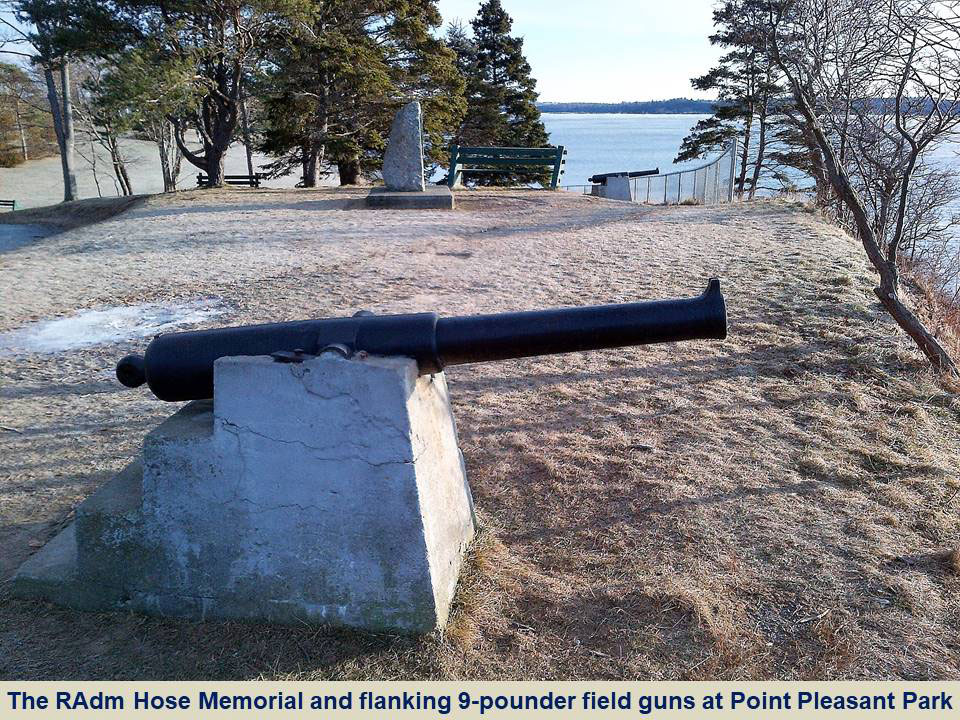 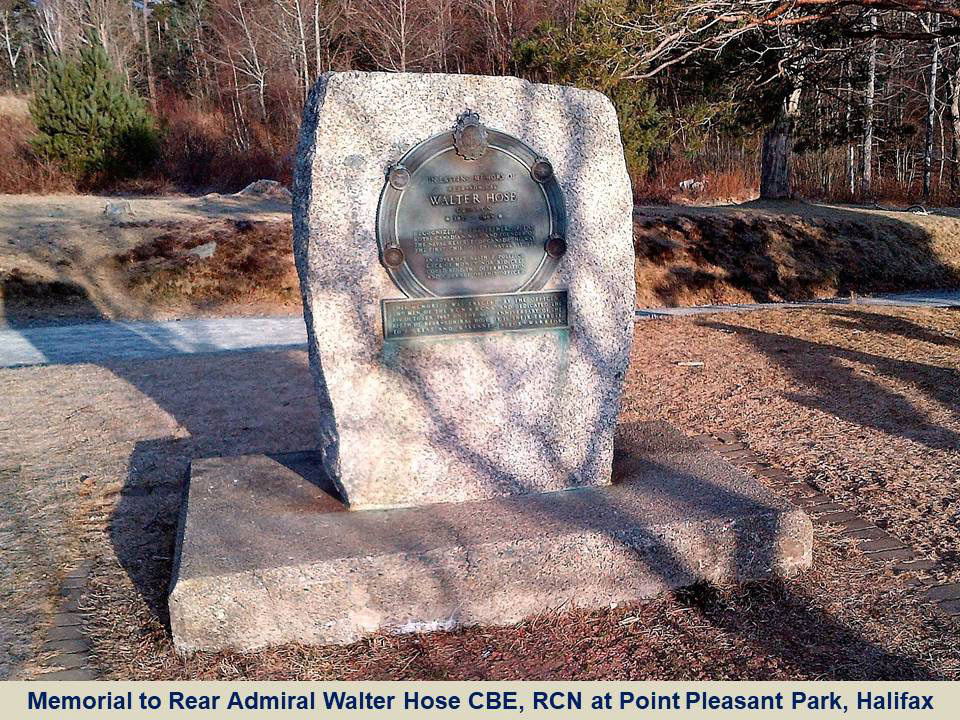 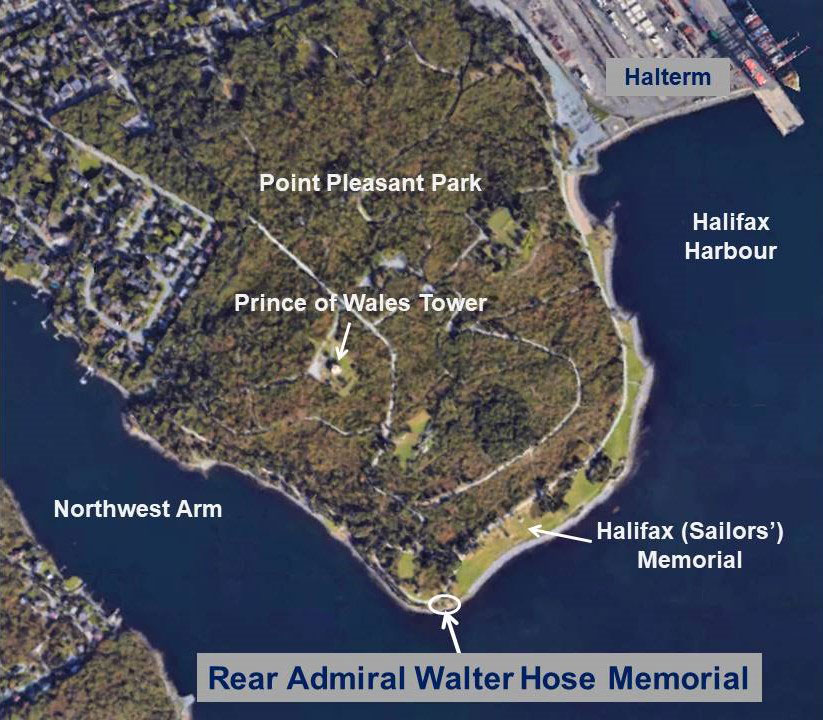 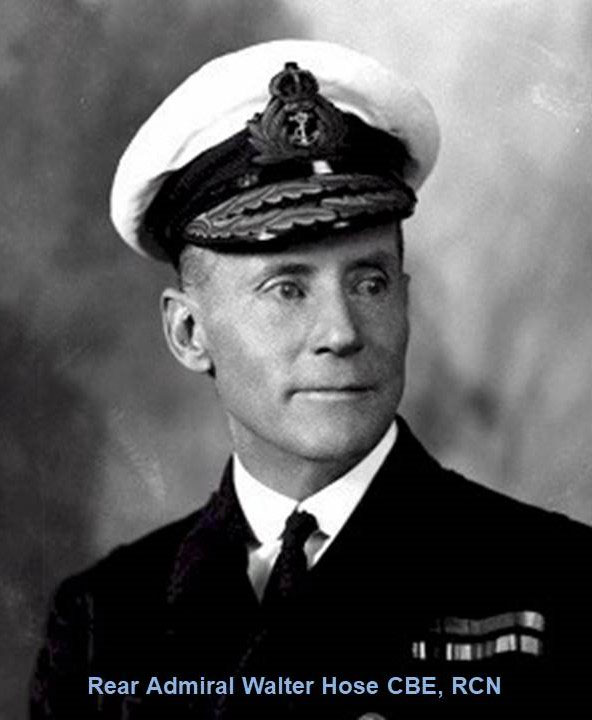 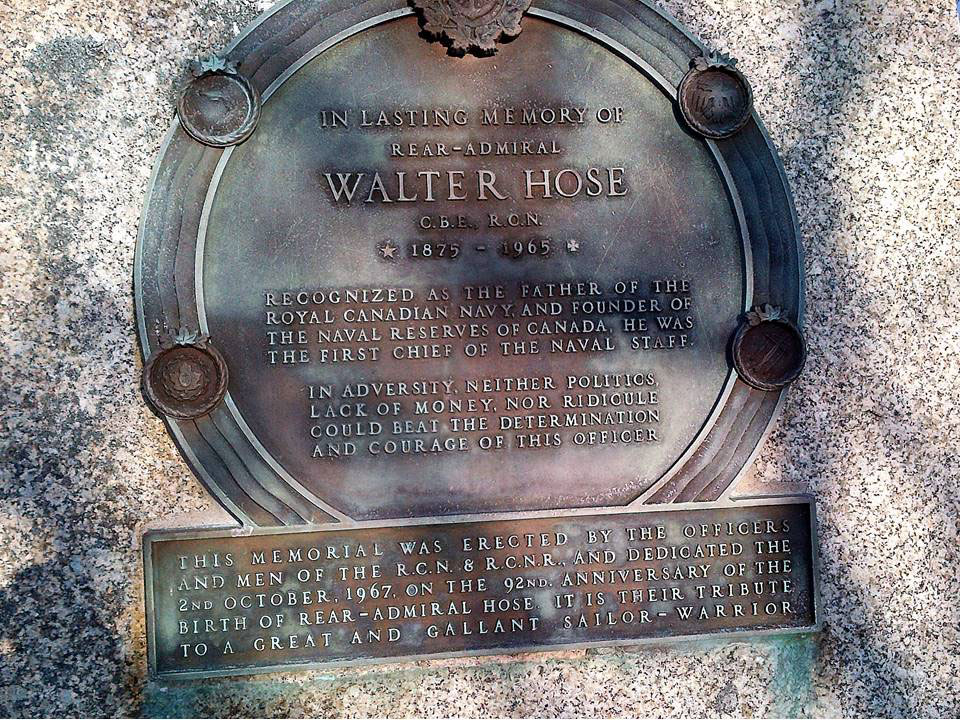 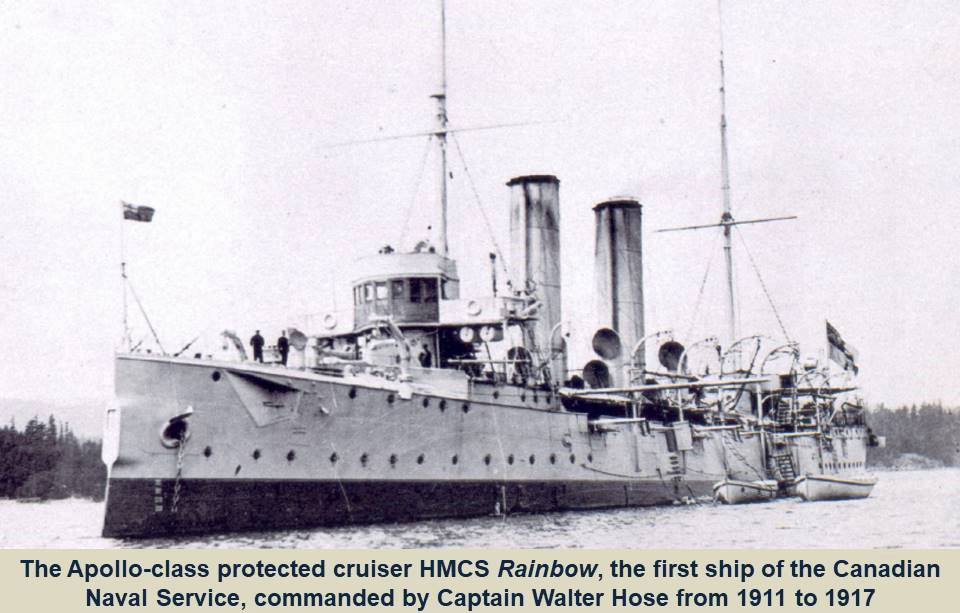 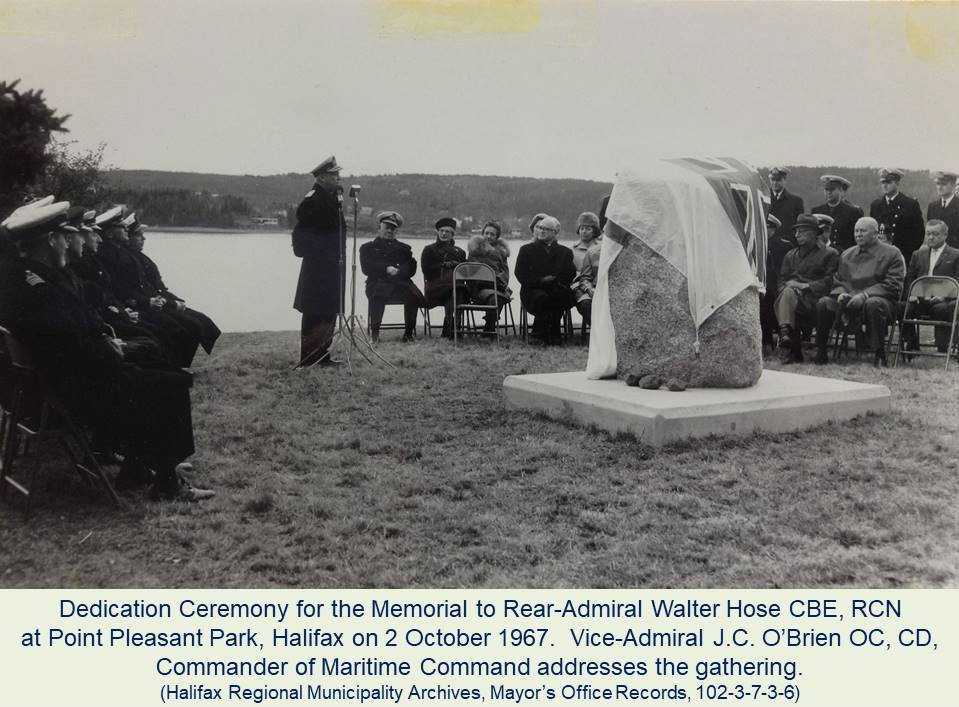 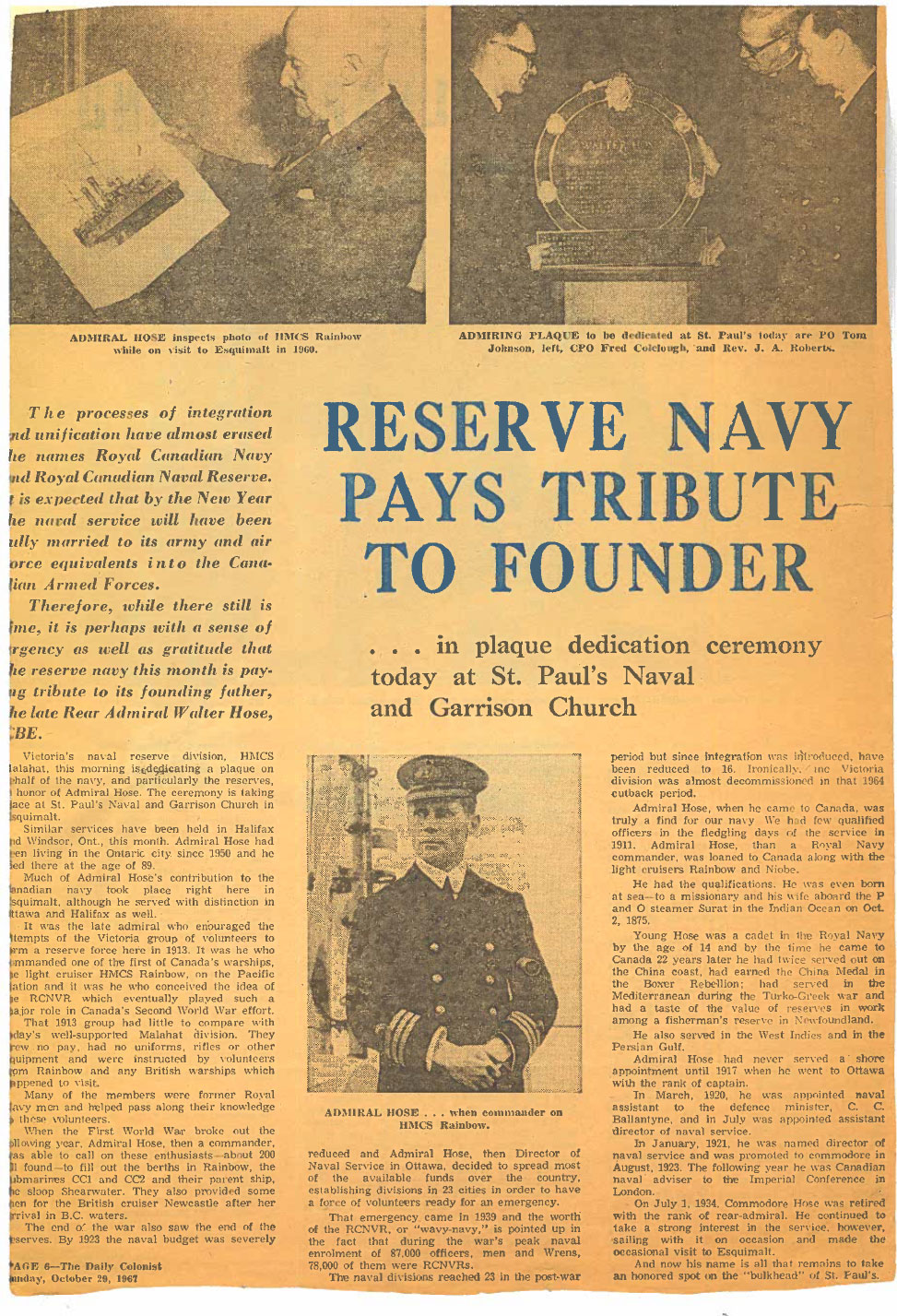 Credited as being the saviour of the Royal Canadian Navy in the early years of its existence, Rear Admiral Walter Hose began his career as an officer in Britain’s Royal Navy in 1889. In the Royal Navy he served in Newfoundland and commanded gunboats in the China and East Indies Station during the Boxer Rebellion.

Transferring to the fledgling Canadian Naval Service in 1912, he commanded the first ship of the RCN, the cruiser HMCS Rainbow, based in Esquimalt BC. During the First World War (1914-1918) he patrolled the Pacific trade routes in Rainbow to protect merchant shipping from German surface raiders. In the final year of the war he was appointed Captain of Patrols responsible for anti-submarine warfare operations in the St. Lawrence area.

In April 1920 Hose was awarded Commander of the Order of the British Empire (CBE) for his “outstanding service as the Assistant Director of the Canadian Naval Service” and in 1922 he was made the Director of the Naval Service (the predecessor of the Commander of the Royal Canadian Navy). Here he faced a concerted effort by the Mackenzie King Liberal government to slash the Naval Service and absorb it into the Canadian Militia. A budget cut of 40% forced Hose to reduce the size of the fleet, close the Naval College and cut personnel to just 400. However, recognizing the need to foster support for the Navy across Canada, he created the Royal Canadian Navy Volunteer Reserve (RCNVR) in 1923, with Naval Reserve Divisions based in all the major cities of the country. This wove the Navy into the fabric of Canadian society.

Hose was named Chief of the Naval Staff in 1928, and continued to work tirelessly against political infighting and the efforts of the Militia to eliminate the Navy. The Great Depression saw further budget cuts in the early 1930s, but Hose battled to retain a small but very professional regular Navy and a vibrant RCNVR that was to serve as the basis for the rapid expansion of the RCN, required when World War II erupted in 1939. Rear Admiral Walter Hose CBE, RCN finally retired from the Navy in 1934 after 45 years of service. He died in 1965 and is buried in Windsor, Ontario.

A granite memorial to Rear Admiral Hose was erected in 1967 by the officers and sailors of the RCN and RCNVR as a “tribute to a great and gallant sailor-warrior.” The monument stands at the southernmost edge of Point Pleasant Park in Halifax, looking out to sea. It is flanked by two 6-cwt 9-pounder rifled muzzle-loading (RML) Field Guns, the naval version of the Royal Artillery 8-cwt 9-pounder. As the epitaph on his memorial indicates, “In adversity neither politics, lack of money nor ridicule could beat the determination and courage of this officer.”