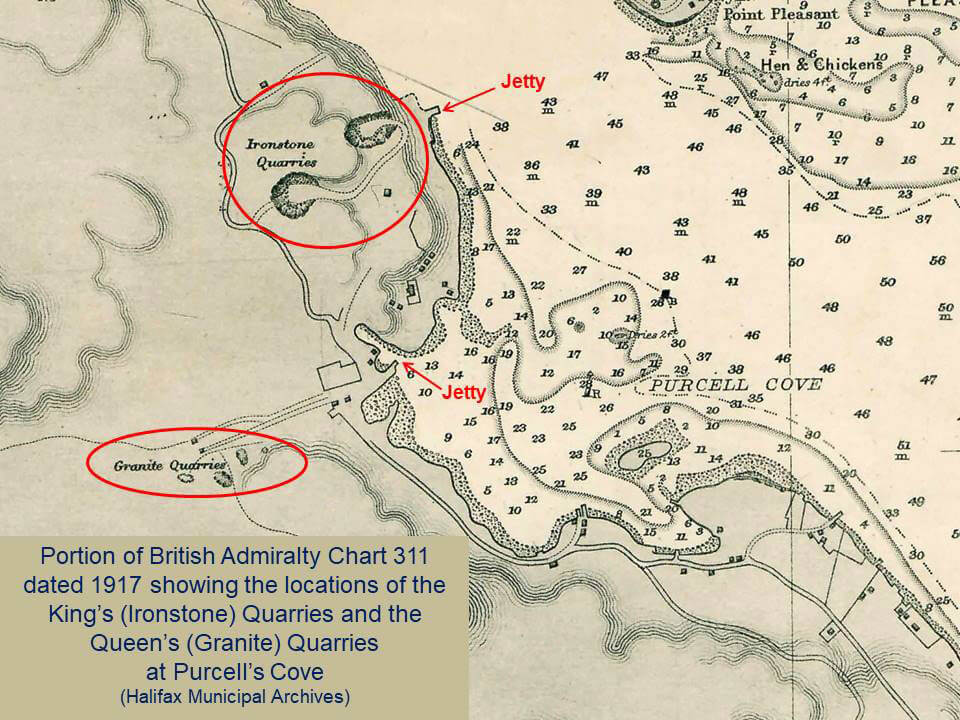 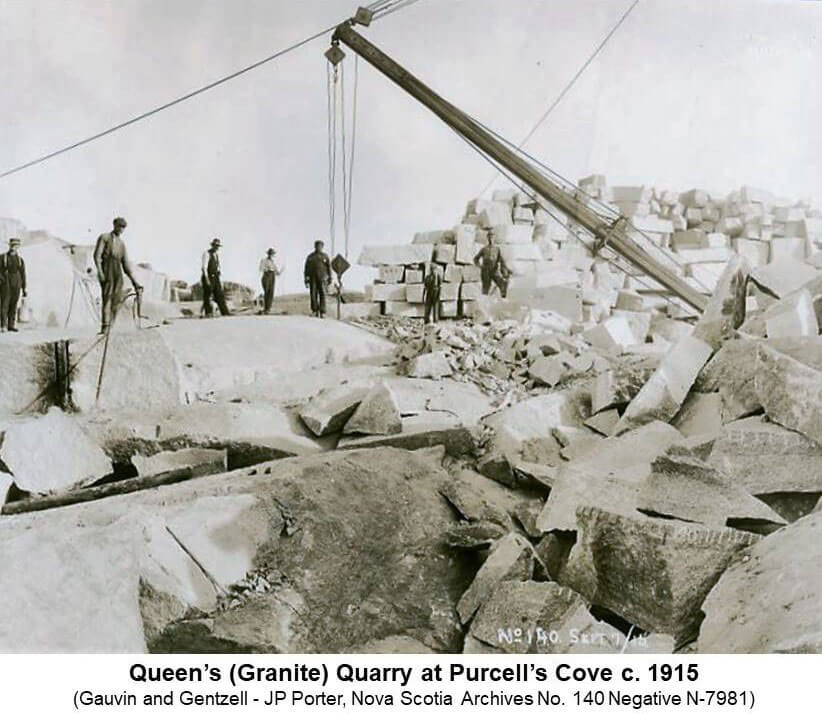 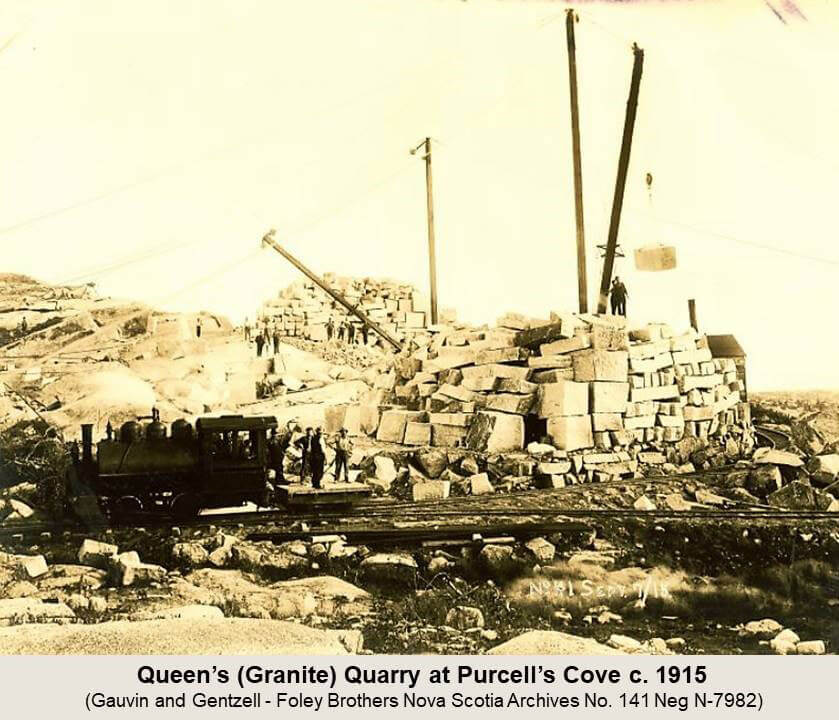 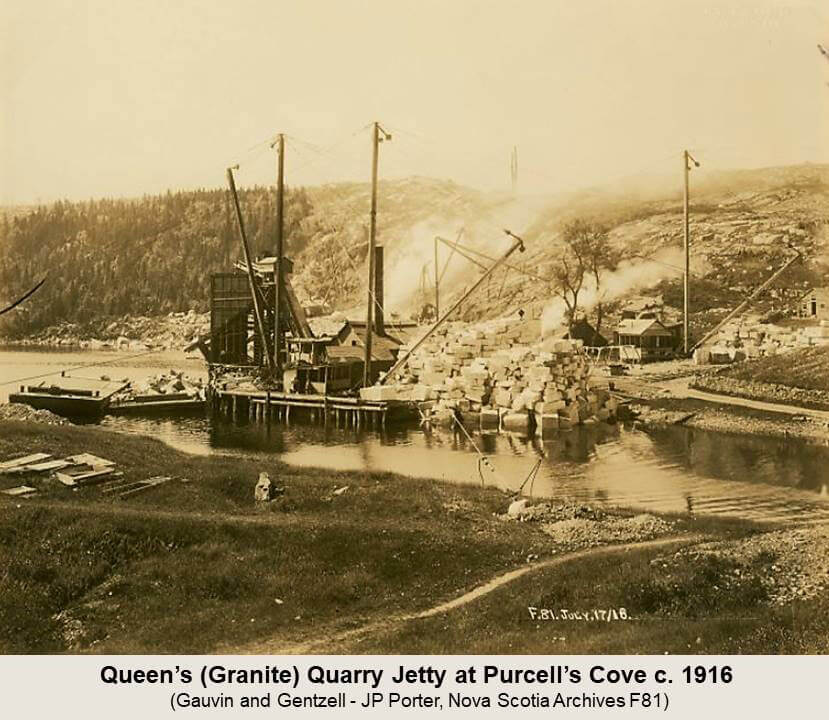 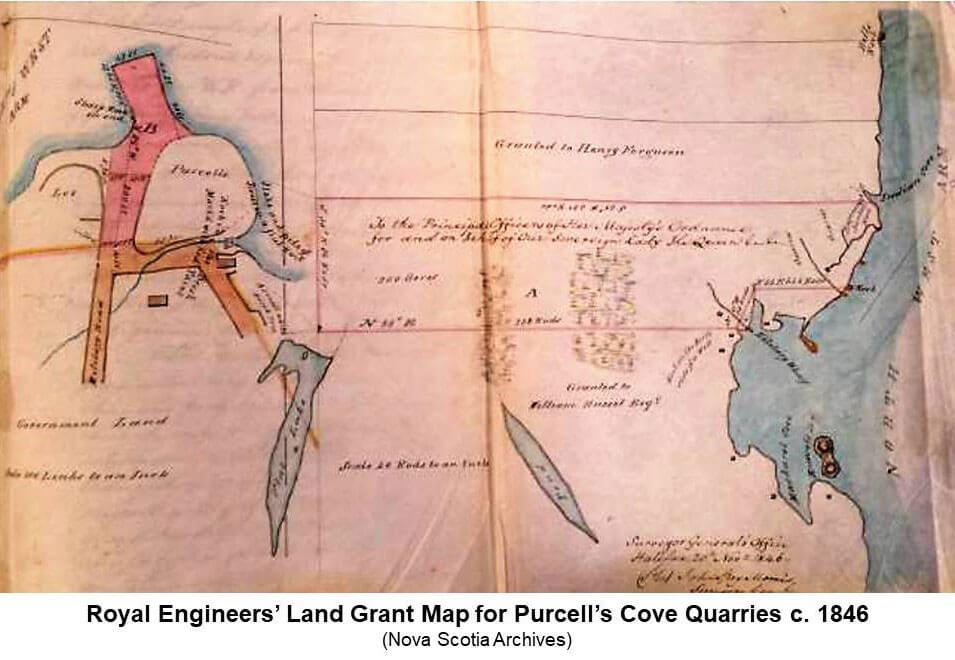 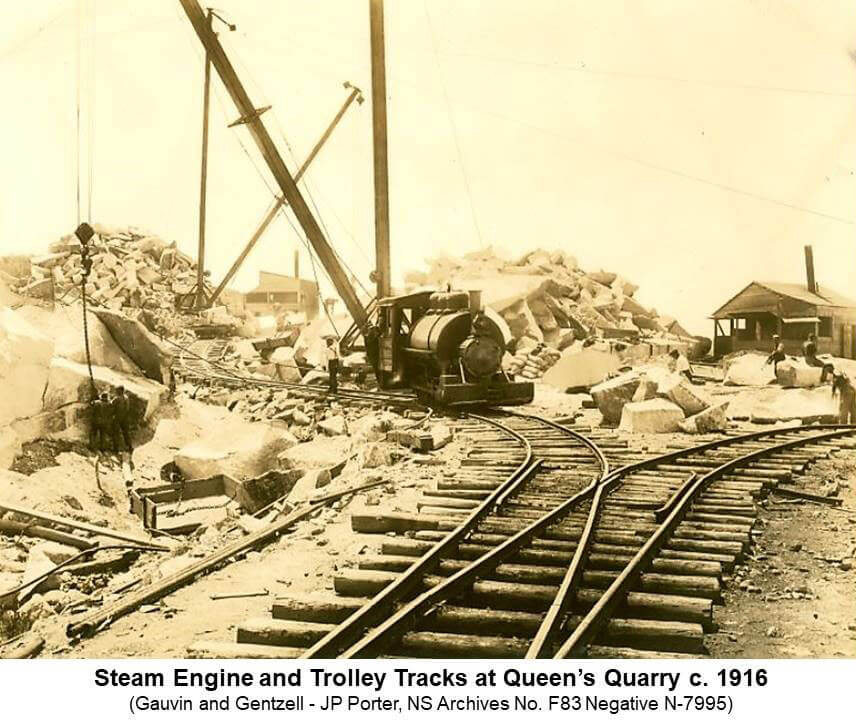 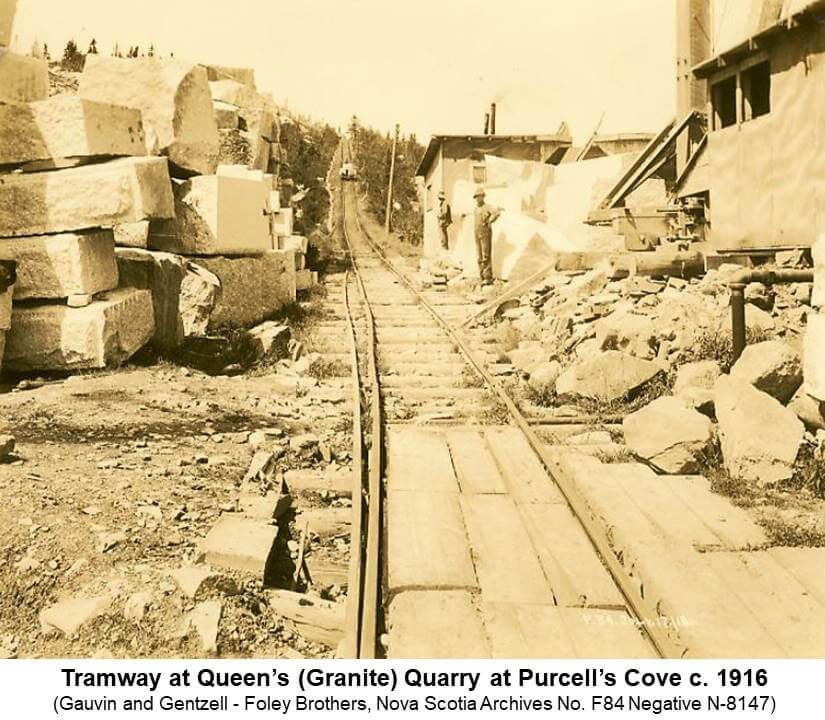 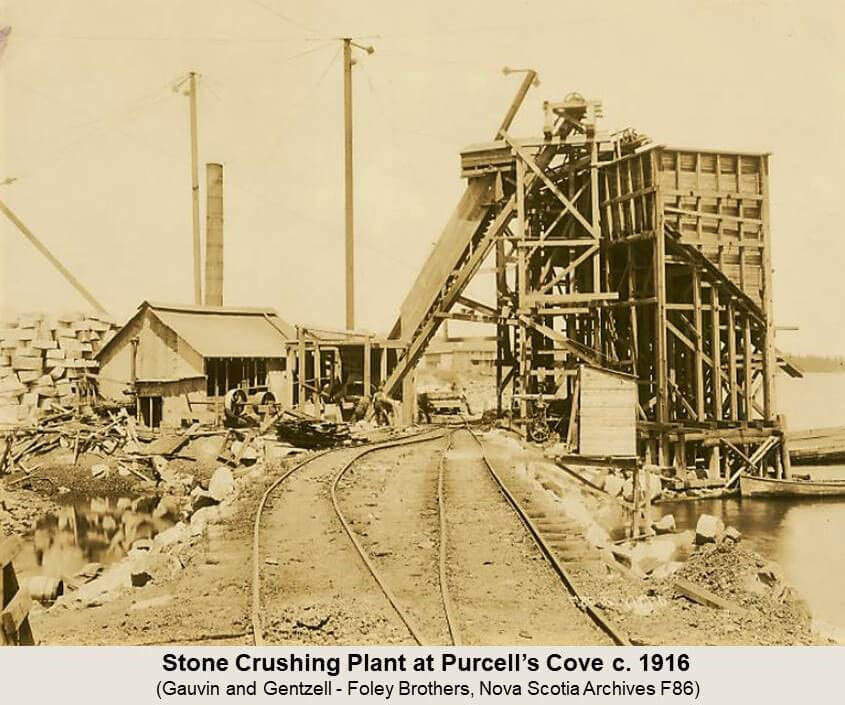 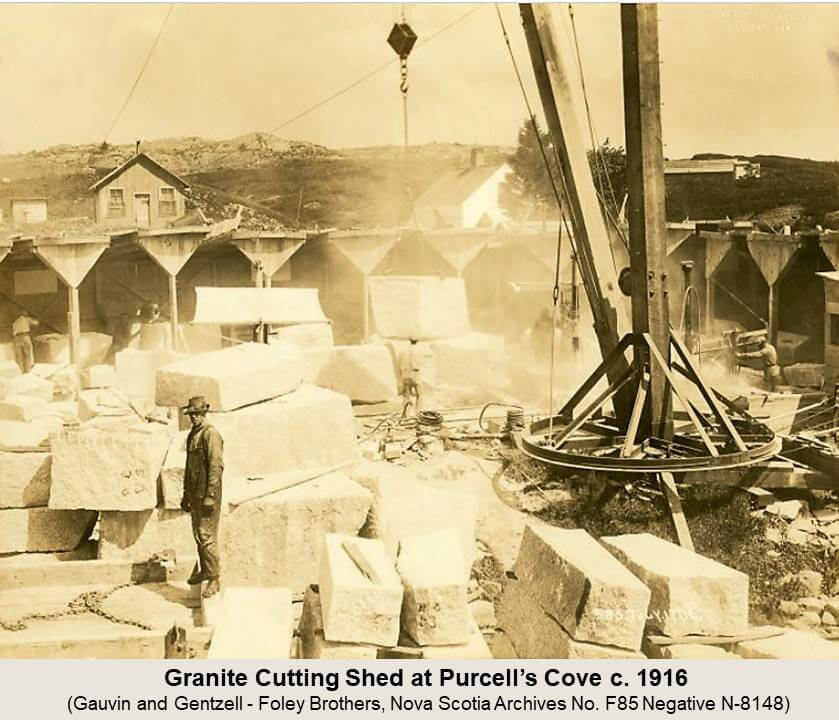 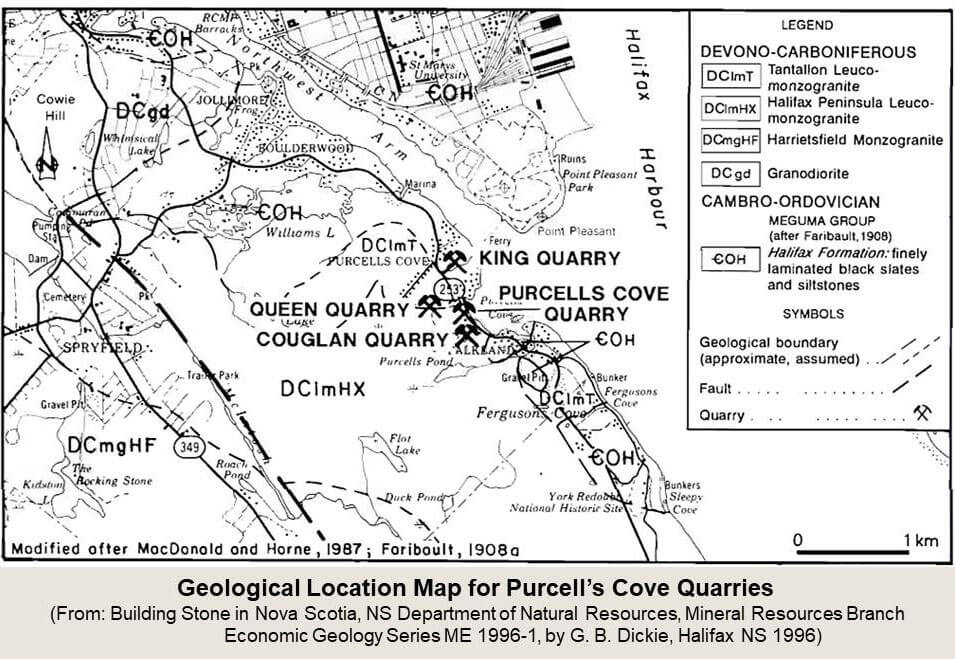 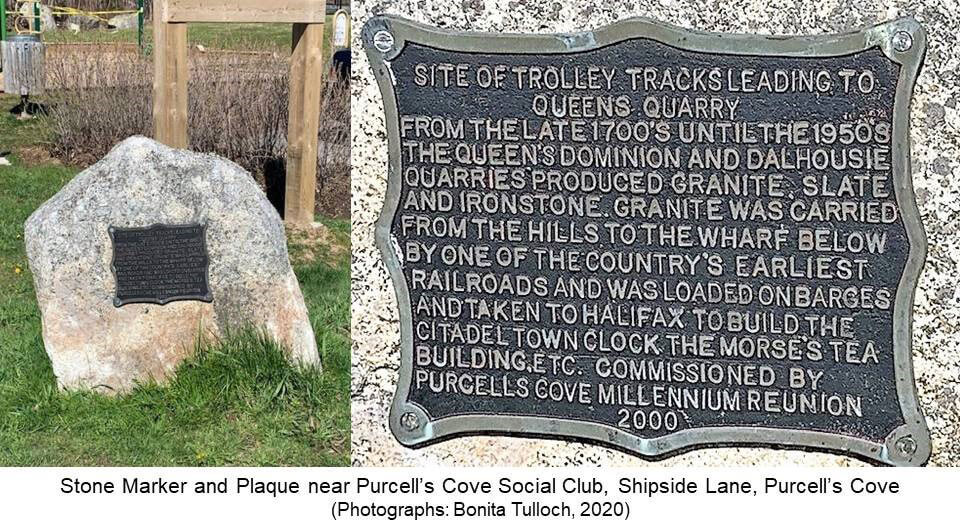 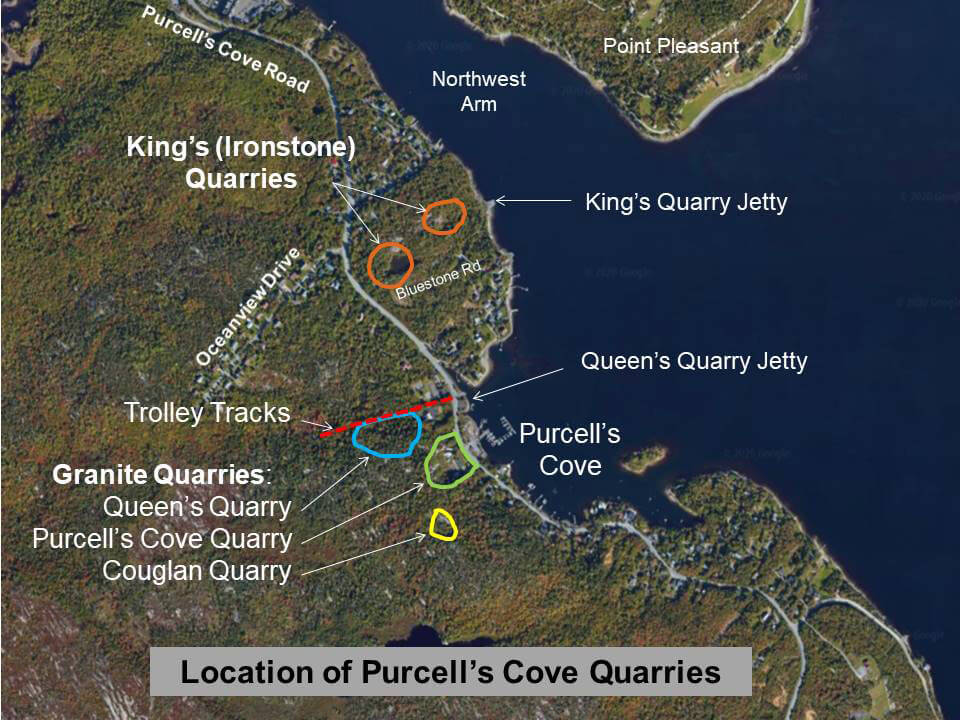 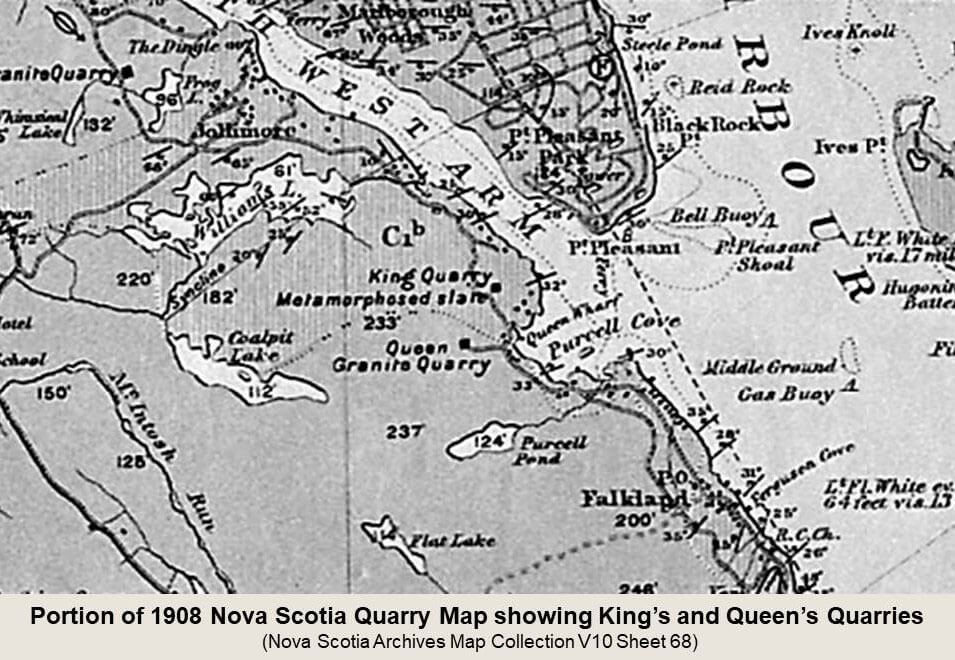 Much of Halifax’s late-18th and 19th century British military and civil infrastructure was built of stone, including the current version of the Halifax Citadel, Admiralty House, the walls of the Grand Parade, the old Post Office, St. Mary’s Basilica and much more. Ironstone was used for many buildings and structures during the latter part of the 18th century, with granite coming into use additionally for much of the 19th century. A large portion of this stone was obtained from local quarries located at Purcell’s Cove, on the western side of the Northwest Arm, near its entrance.

The King’s Quarry was likely the oldest quarry in Halifax, in operation from the late 1700s. It consisted of two large, horseshoe-shaped sites, each about 150 metres across, located on the northern side of Purcell’s Cove east of the present Purcell’s Cove Road. The easternmost of the two sites is just 150 metres from the water’s edge, served by the nearby King’s Quarry Jetty on the shore of the Northwest Arm, while the second site is 200 metres further inland – both are just north of today’s Bluestone Road. The King’s Quarry produced black slate and ironstone, which is common throughout much of southern mainland Nova Scotia, and which can be seen in the Prince of Wales Martello Tower at Point Pleasant (constructed 1796-98), in the foundations of the Garrison or Town Clock and in many of the older buildings of Dalhousie University.

Granite from an early 19th century quarry operated by John Trider, just west of Purcell’s Cove was used for the construction of Sherbrooke Tower, the combined Martello tower and lighthouse that was commenced at Maugher’s Beach on McNab’s Island in 1814 (but not finished until 1828). This is believed to have been one of the first instances of granite being used for building in Halifax, earlier construction having relied mainly on ironstone. The quality of the stone was such that the Ordnance Department assumed the title of the quarry and surrounding area on 18 November 1828, under the name of the Queen’s Quarry. The property deed specified three officers as recipients of the site: Colonel Gustavus Nicolls, the Commander Royal Engineers in Halifax; the Honourable Charles Morris, Surveyor General; and Sir Rupert de George, Secretary of the Province of Nova Scotia. Nicolls had earlier built Sherbrooke Tower and was responsible for overseeing the reconstruction of the Citadel beginning in 1828.

Granite quarrying operations would eventually shift from the Queen’s Quarry to the nearby Purcell’s Cove and Couglan Quarries. The various quarries at Purcell’s Cove supplied tens of thousands of tons of choice squared granite and quarry-faced ironstone to the Citadel over the next three decades. It was used in the high revetments of the escarp and counterscarp (the inner and outer walls of the ditch surrounding the citadel), the interior retaining walls and various buildings of the fortress.

The stone was transported to Halifax by barge; loaded from a military jetty (Queen’s Quarry Jetty) built in Purcell’s Cove. Work at the quarry site was done by detachments of the Royal Sappers & Miners assisted by Troops of the Line. To move the granite more easily from the quarry to the cutting shed on site and then to the jetty below, a short rail track was laid in 1834 and a steam engine employed for the purpose. This was one of the country’s earliest railways and the first to be constructed in Eastern Canada.

All of the Purcell’s Cove quarries are now abandoned, the last one to finish operating was the Couglan Quarry in the early 1960s (it had been acquired by Dalhousie University some years earlier). There is little remaining to indicate their presence, save the excavated areas now overgrown with vegetation and, in the case of the westernmost King’s Quarry, now forming a small lake. The two King’s Quarry sites and their jetty can be accessed on foot off Bluestone Road today. The Queen’s Quarry Jetty too still exists in Purcell’s Cove itself, and the stone bed of the tramway track leading inland can be discerned. There is a small cairn with a plaque near the Purcell’s Cove Social Club on Shipside Lane, just up from the Queen’s Quarry Jetty, which marks the trailhead for an unofficial walking trail through the Queen’s Quarry. The trail runs uphill, parallel to the old tramway bed a few metres to its left.