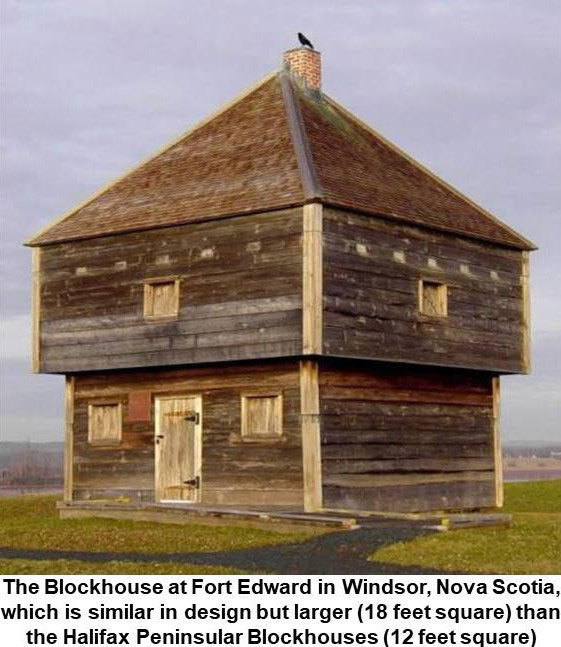 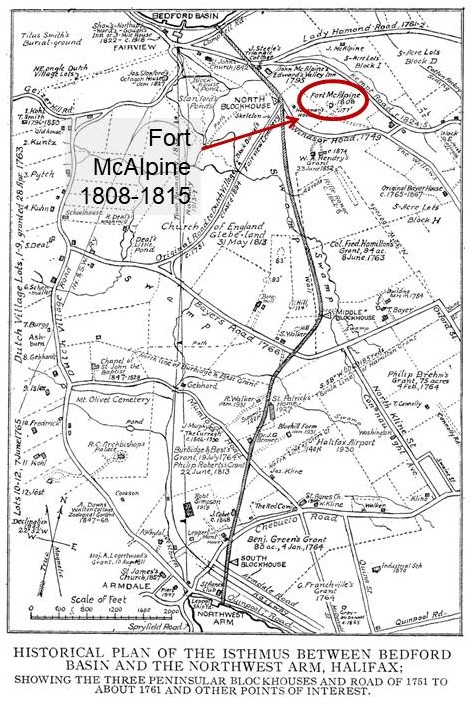 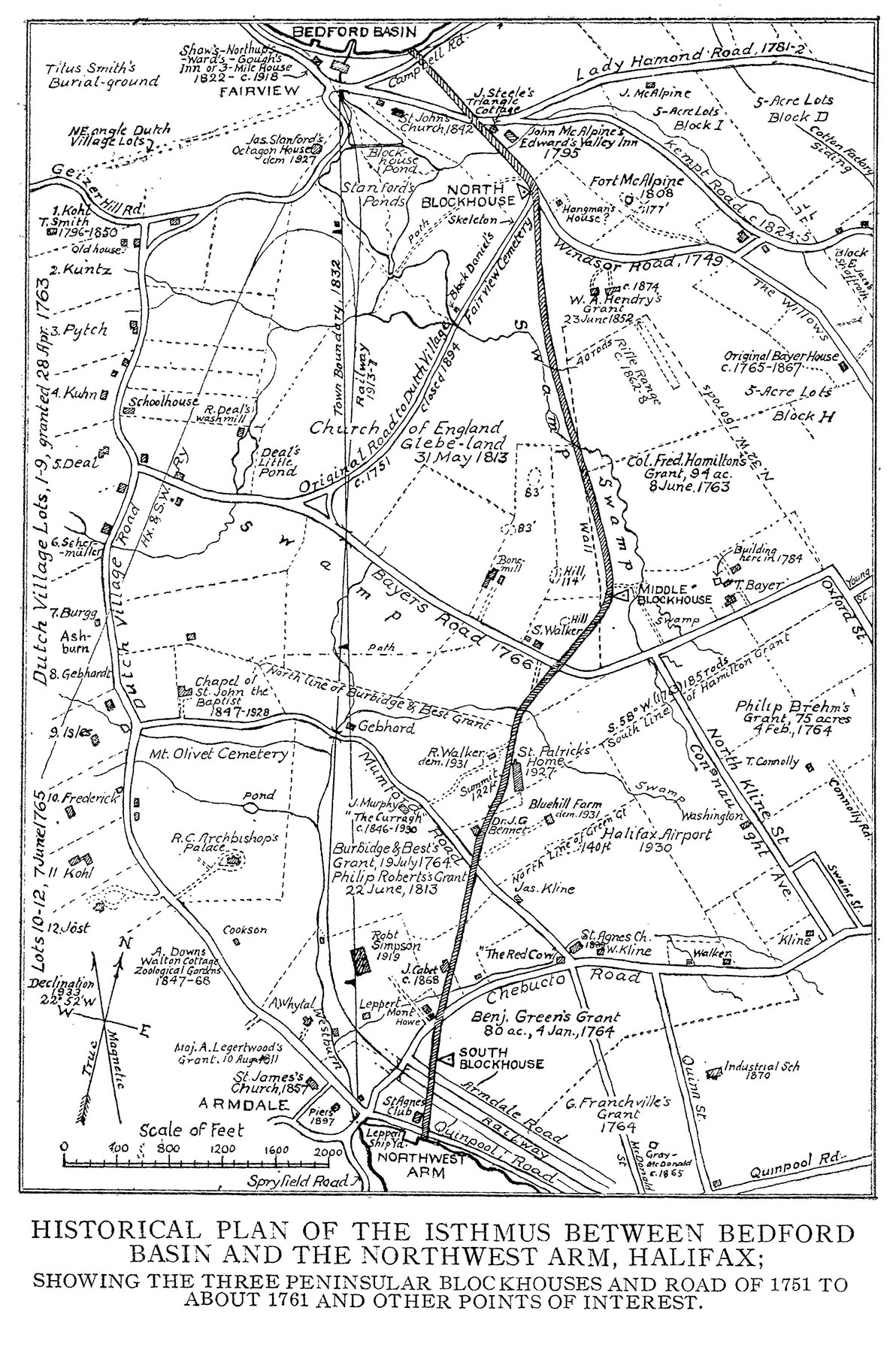 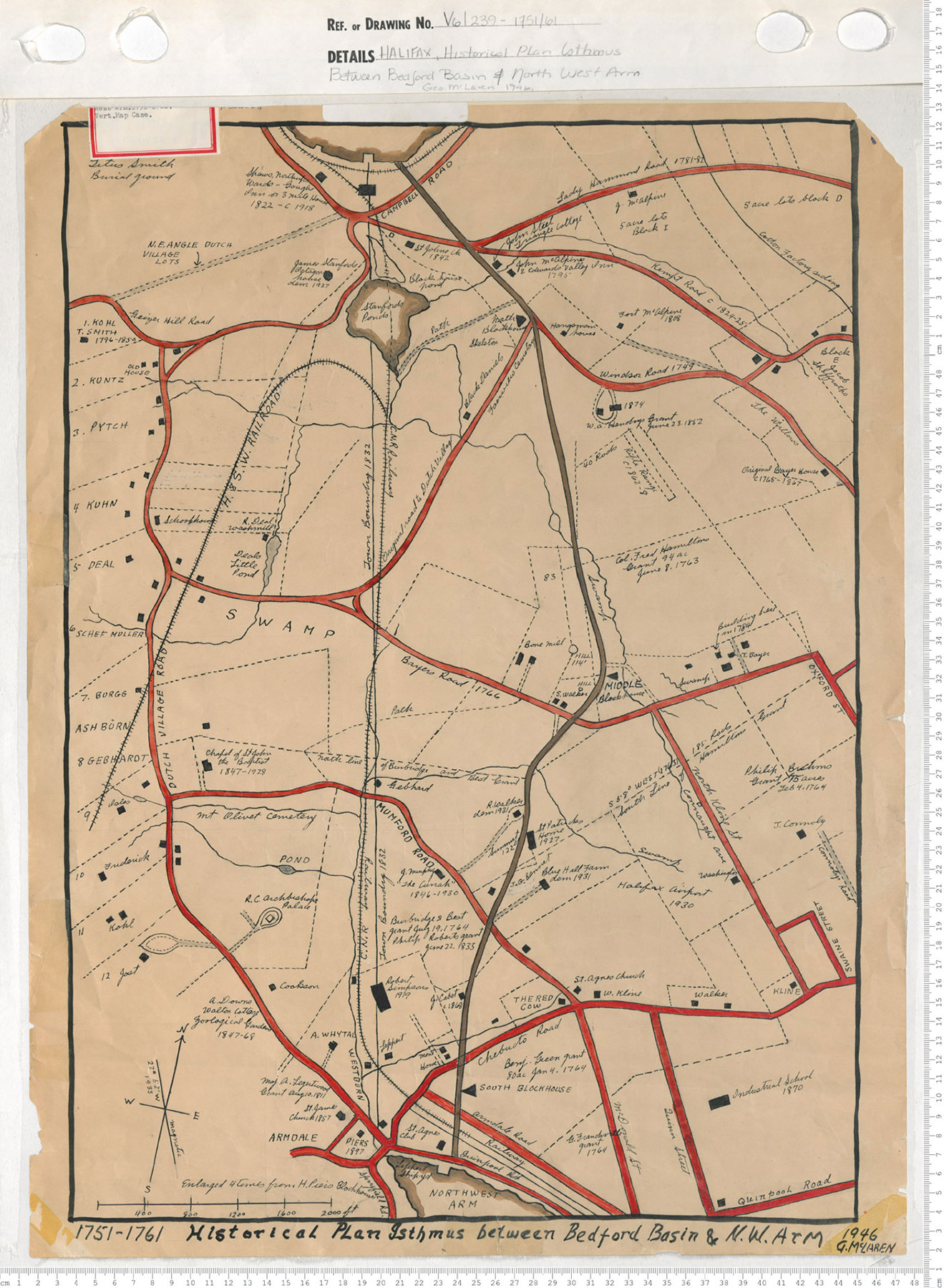 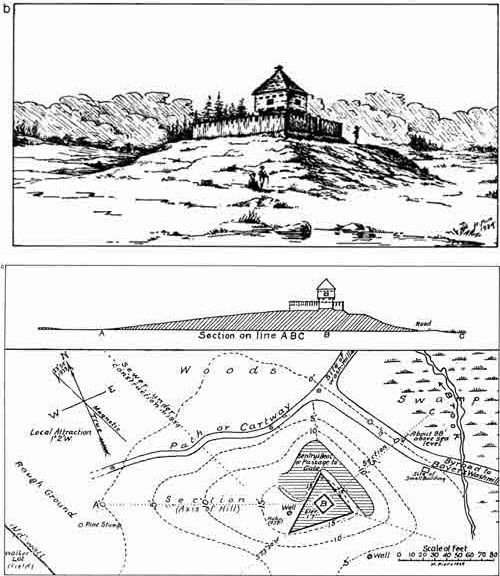 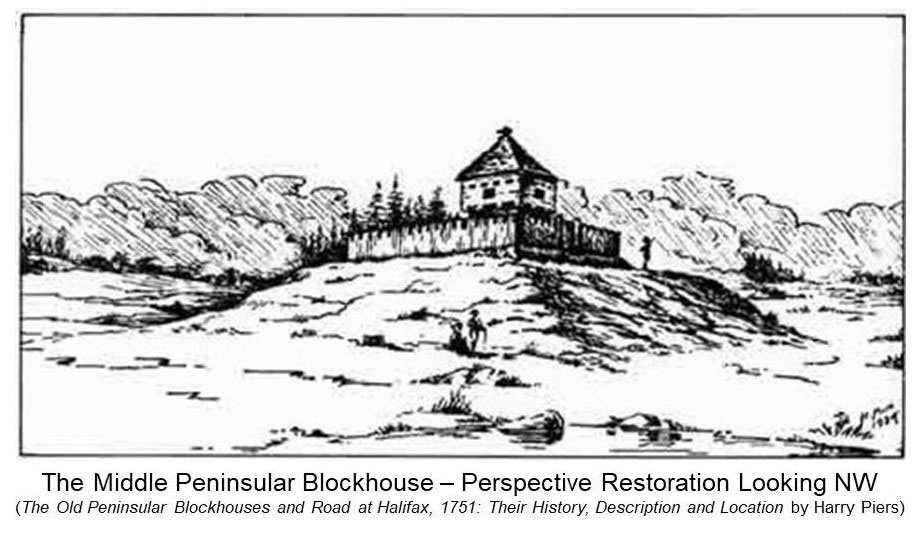 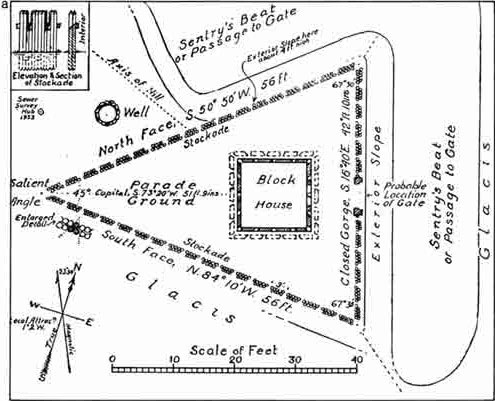 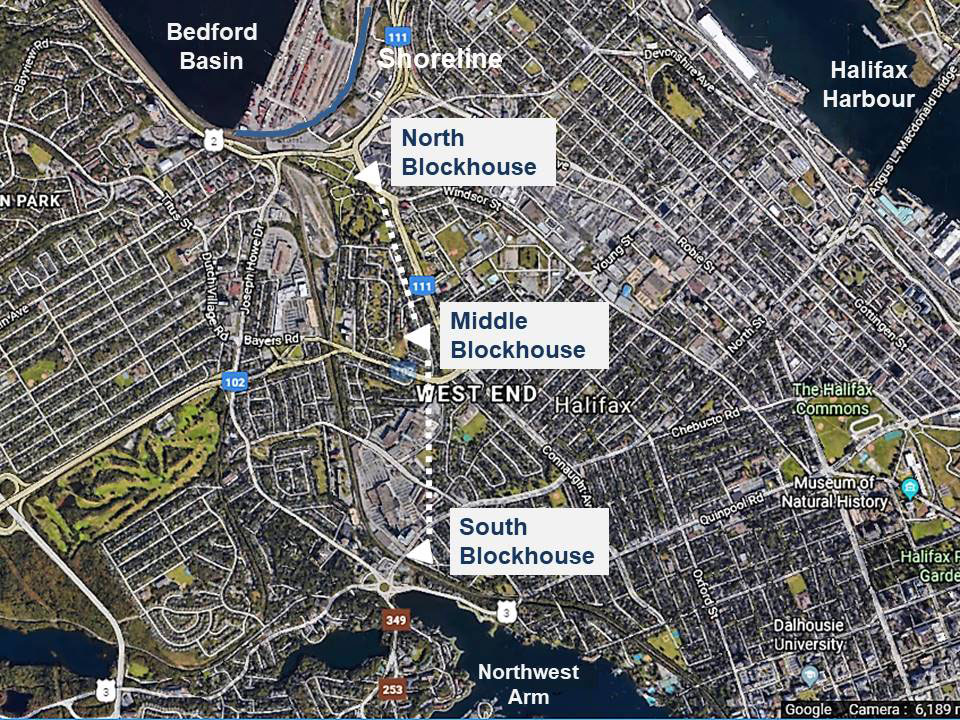 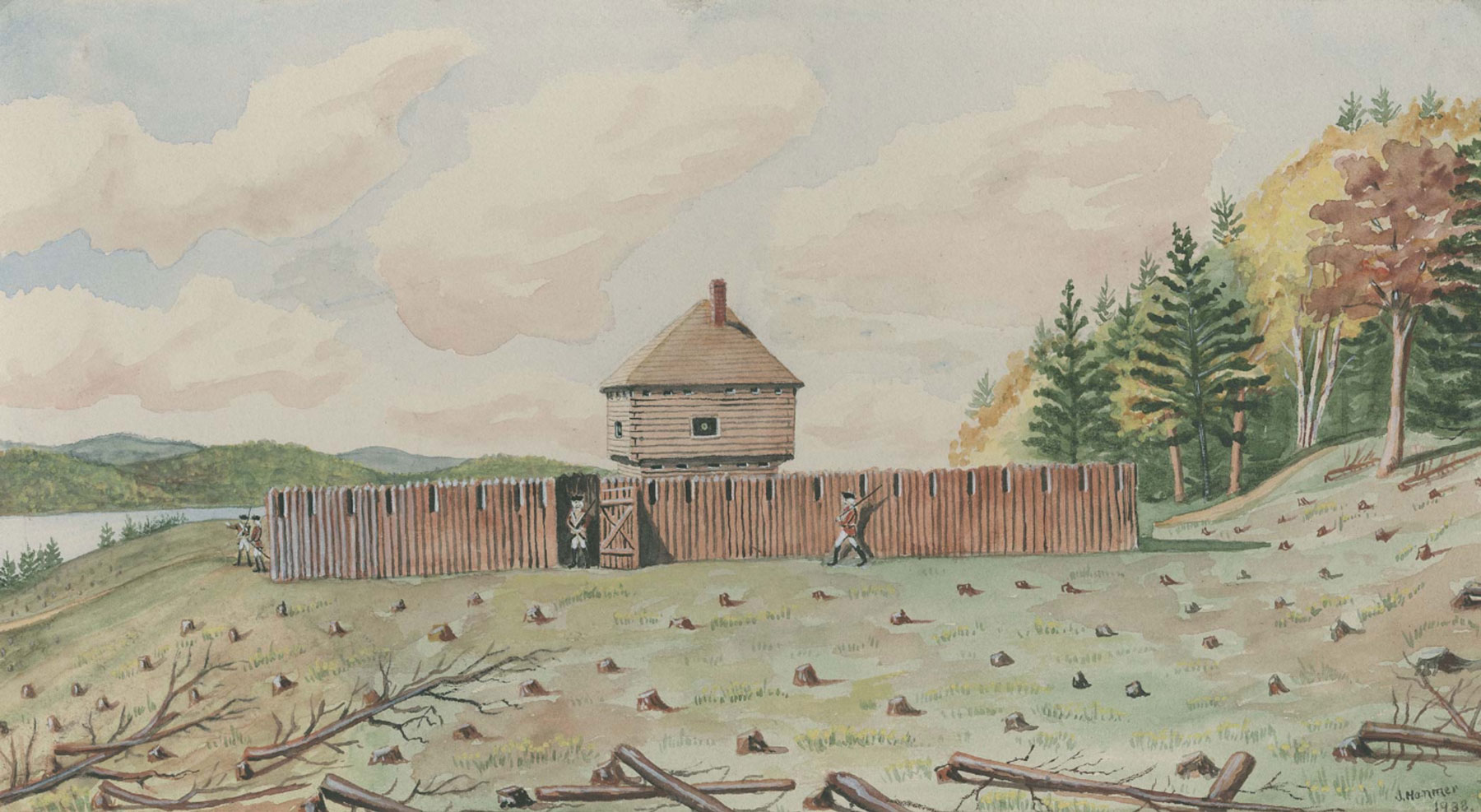 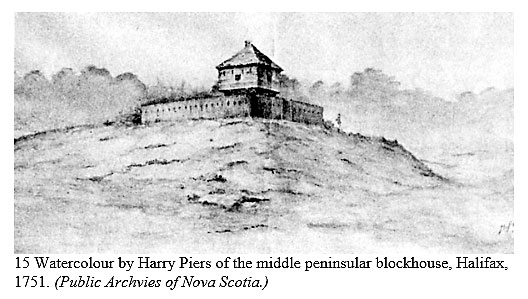 In Halifax in the spring of 1751, as further European settlers arrived and the town began to expand beyond its initial footprint on the eastern slope between Citadel Hill and the harbour, the peninsula was laid out in 5-acre lots to support farming. Native forces had already attacked settlers, killing four of them at the saw-mill in Dartmouth in September 1749, and carried out several more raids in 1750 and 1751, including the ‘Dartmouth Massacre’ of May 13, 1751. Therefore, to protect the farm lots beyond the initial palisade wall that ringed the town amid rumours of another attack by native forces, Governor Edward Cornwallis and his chief engineer Major-General John Henry Bastide conceived an outer defensive line of three small blockhouses connected by a patrol road running between Bedford Basin and the Northwest Arm. Positioned on the highest ridges of land in the area and overlooking the narrow 1½ mile-wide isthmus that connected the Halifax peninsula to the mainland, these fortifications were known as the Peninsular Blockhouses (North, Middle, and South) with the Peninsular Road connecting them.

The North blockhouse was built on an elevation just inside and west of the current location of the gate to Fairview Cemetery, on the northwest side of the cemetery driveway; the Middle blockhouse was constructed on a small hill just north of Bayer’s Road near Westwood Park; and the South blockhouse was positioned just east of the current railway bridge on Chebucto Road, approximately between present-day Joseph Street and Roosevelt Drive.

Intended only as temporary works, each blockhouse was about 12 feet square and 25 feet in height. Each was surrounded by a triangular palisade of double pickets 60 feet long on the long sides and 45 feet long across the rear, about 8 feet high and with musket loopholes. The blockhouses themselves were two-storey, machicolated structures made of thick horizontal squared timbers, pre-fabricated in the town, with musket loopholes and an opening on each side for a small cannon (likely a short brass 3-pounder) using canister or grape shot, or a swivel-gun. They would have each resembled the Fort Edward blockhouse that remains today at Windsor, Nova Scotia, only smaller. Each had accommodations for a guard consisting of a corporal and 10 to 20 men. The blockhouses were connected by a small patrol road that ran from a little east of Fairview on the shore of Bedford Basin to the shore at the head of the Northwest Arm.

The North blockhouse was once attacked by surprise by natives, who killed all six of the guards (a non-commissioned officer and five privates). In another attack in about 1754 near the South blockhouse, natives killed three workers at the saw-mill on the stream flowing from Chocolate Lake. Thomas Beamish Akins in his History of Halifax City writes, “their bodies were buried by the soldiers near one of the blockhouses, and were three times dug up by the Indians in defiance of the guard, for the purpose of securing the scalps.”

In 1753 a similar blockhouse system was put in place to defend the newly-established town of Lunenburg, which was fortunately also located on an easily defensible peninsula like Halifax. Like the Peninsular Blockhouses the structures were pre-fabricated in Halifax and shipped to Lunenburg for assembly. The following year, in 1754 another system of blockhouses was put in place to protect the settlement at Lawrencetown, although the settlement there lasted only three years.

The Peninsular Blockhouses endured for a decade until about the early 1760s, by which time, with the defeat of French forces in North America and the decline of the associated French encouragement and support for native incursions against the British, the threat of native attack had faded. The blockhouses were abandoned after about 1761, and their sites passed into private ownership; they soon fell into ruins and disappeared over the next two decades.