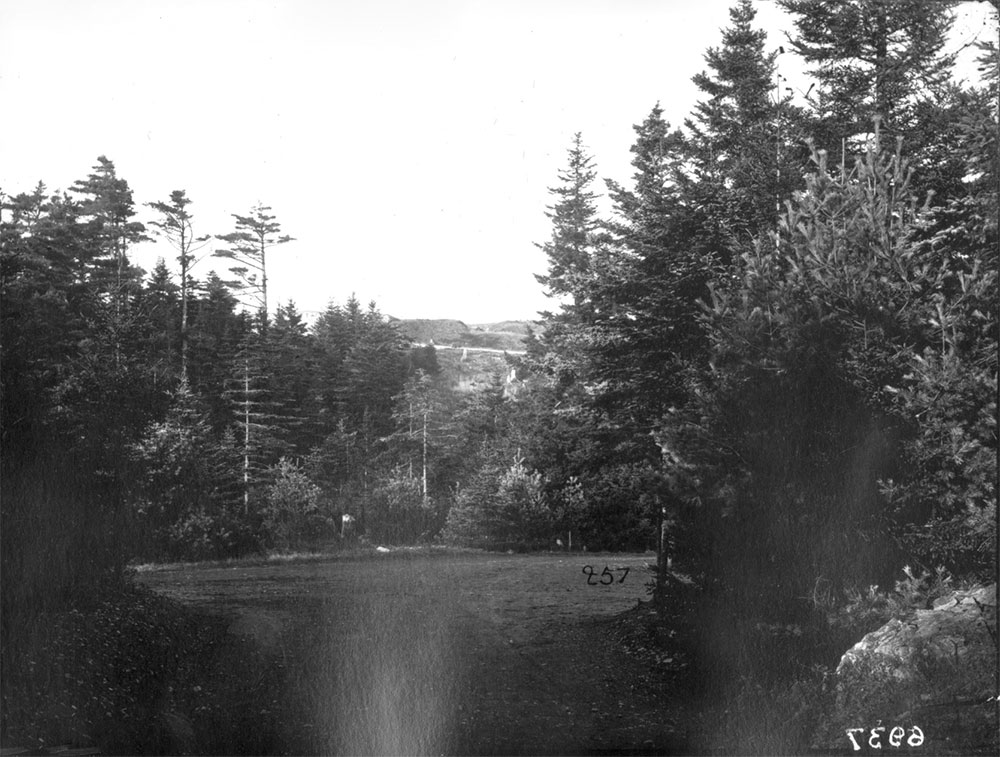 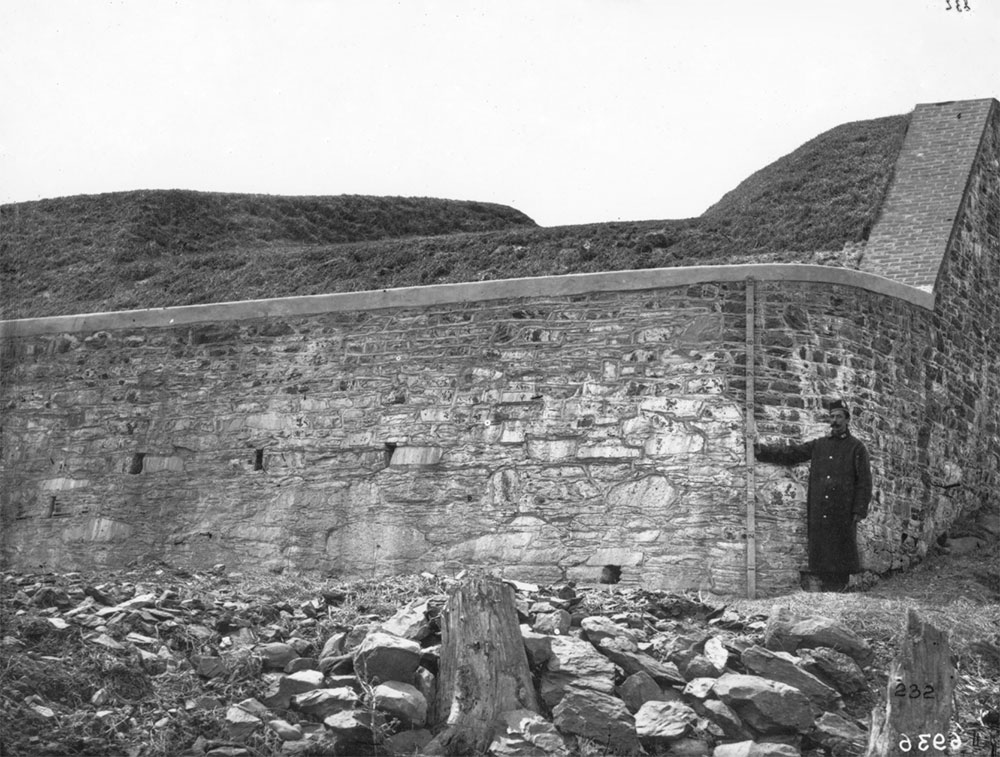 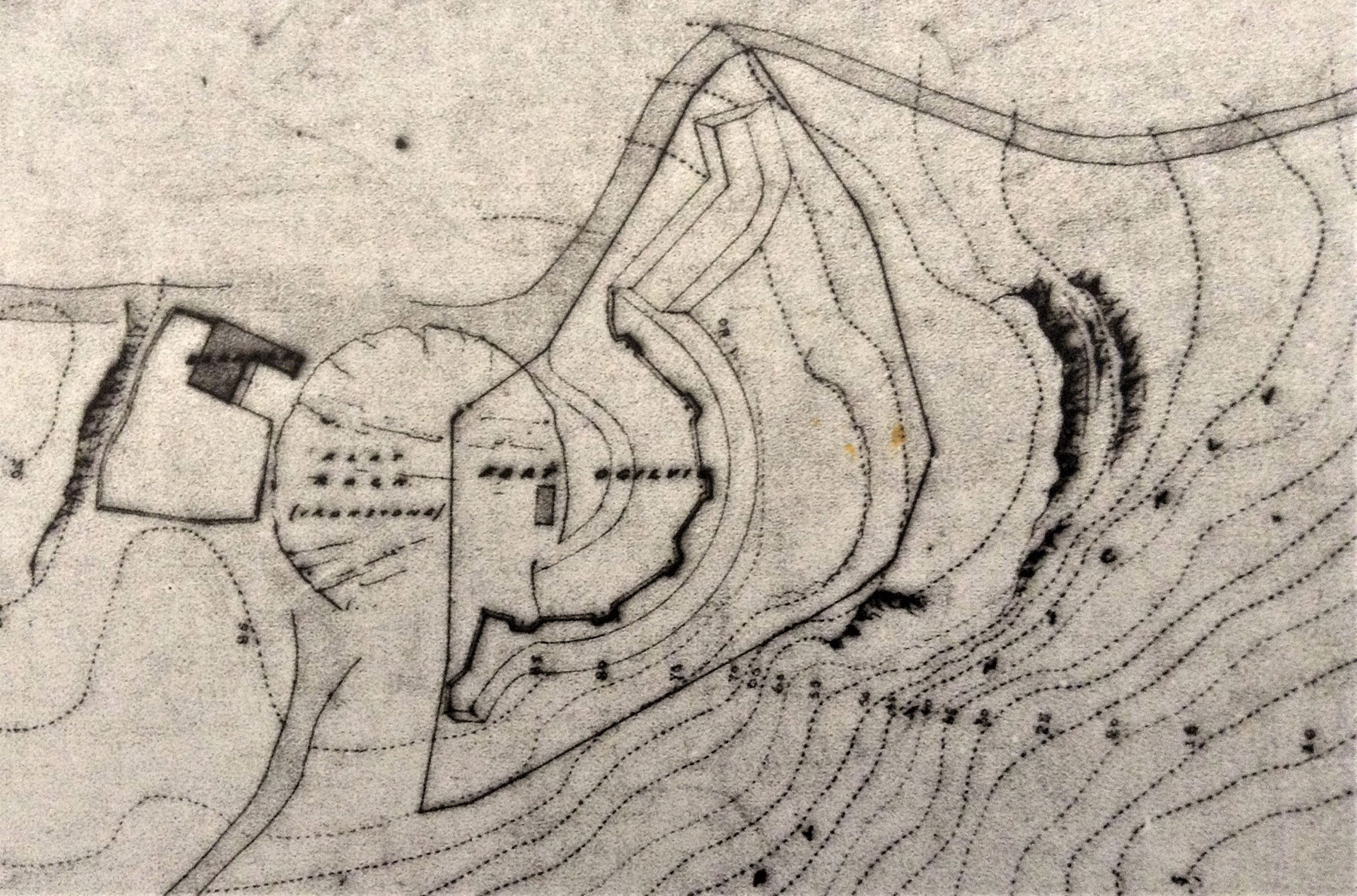 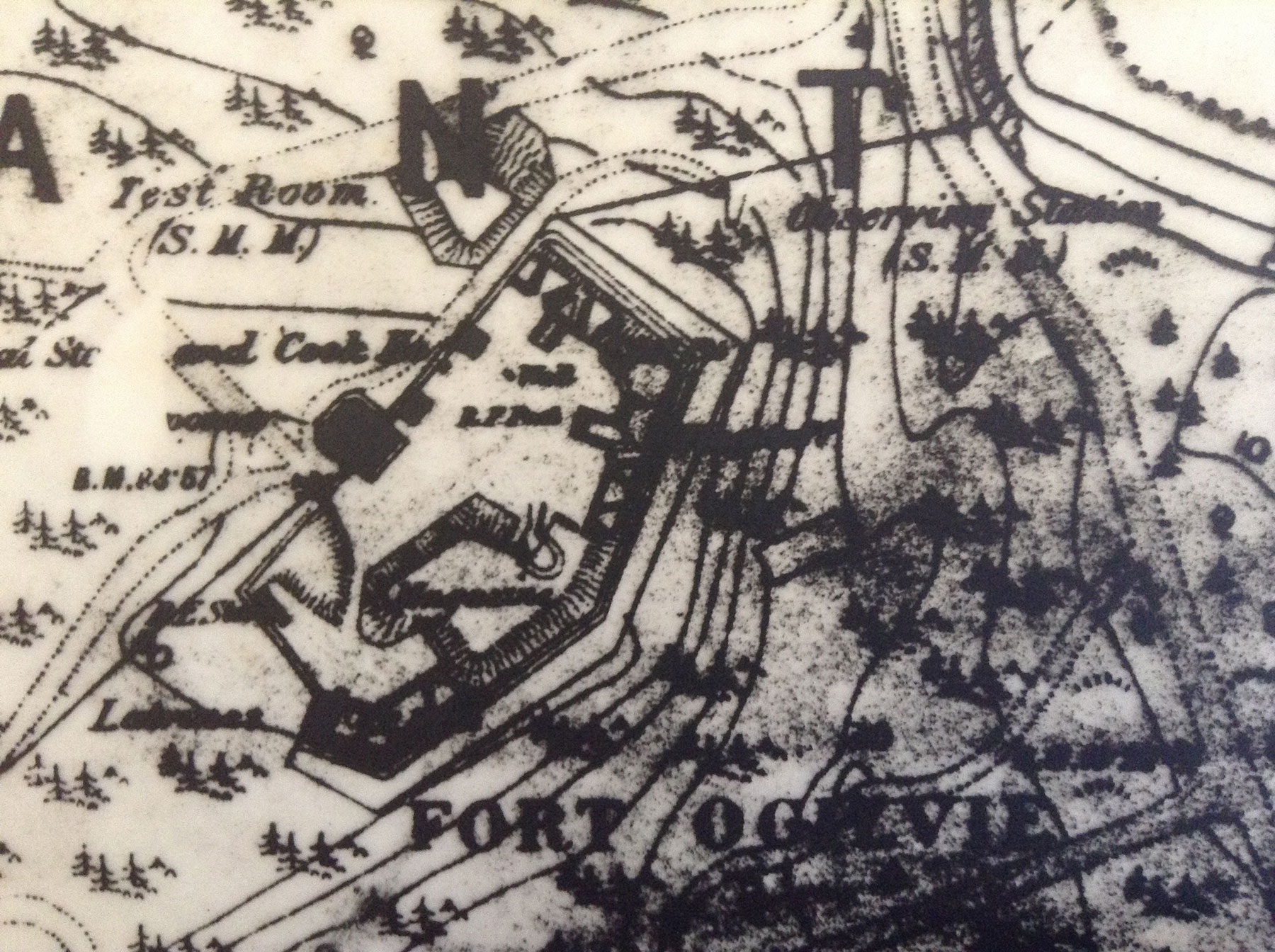 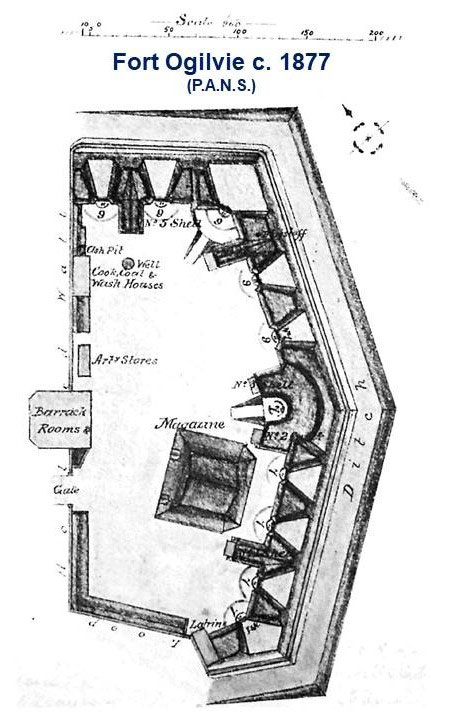 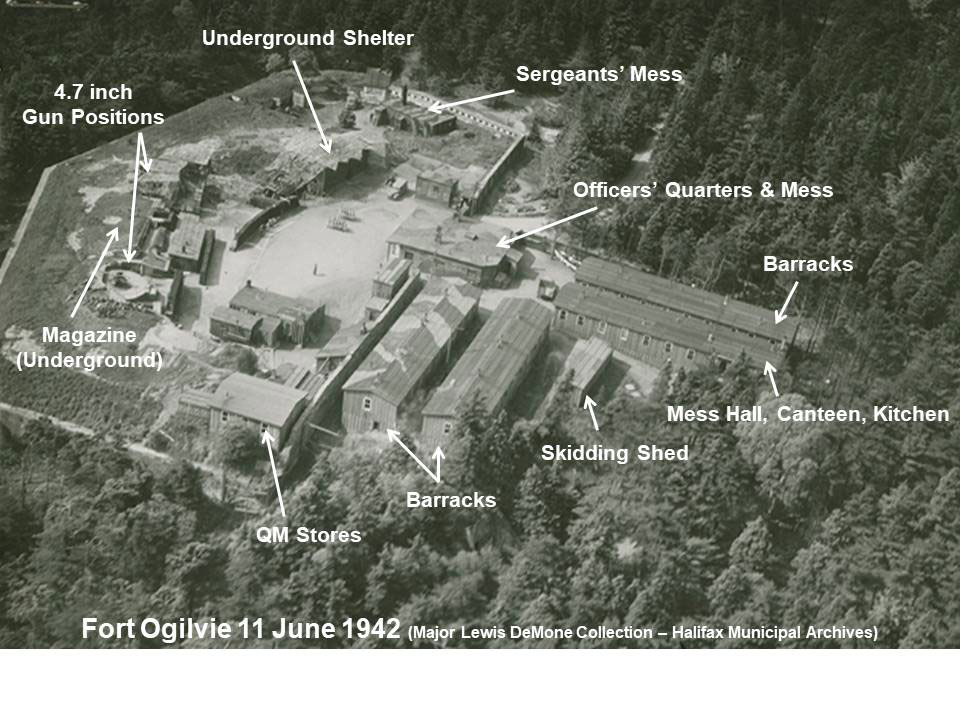 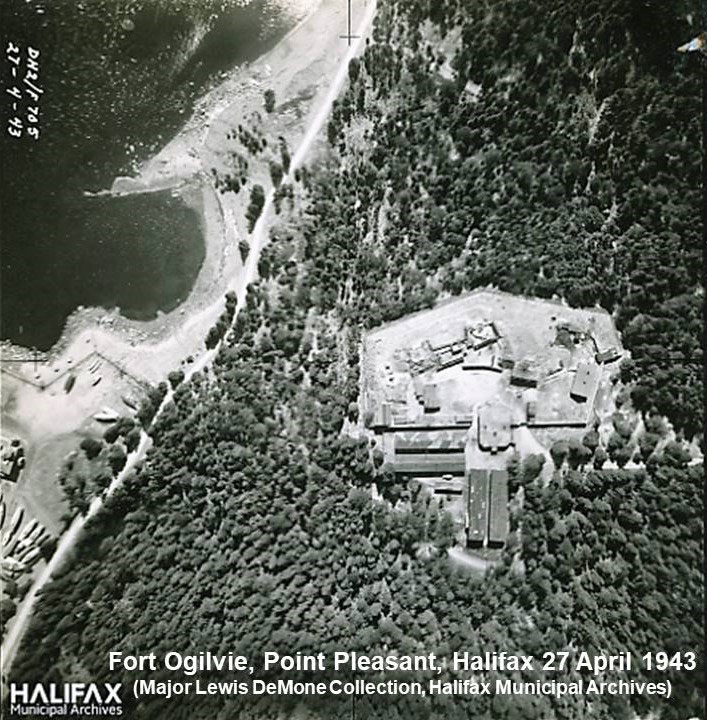 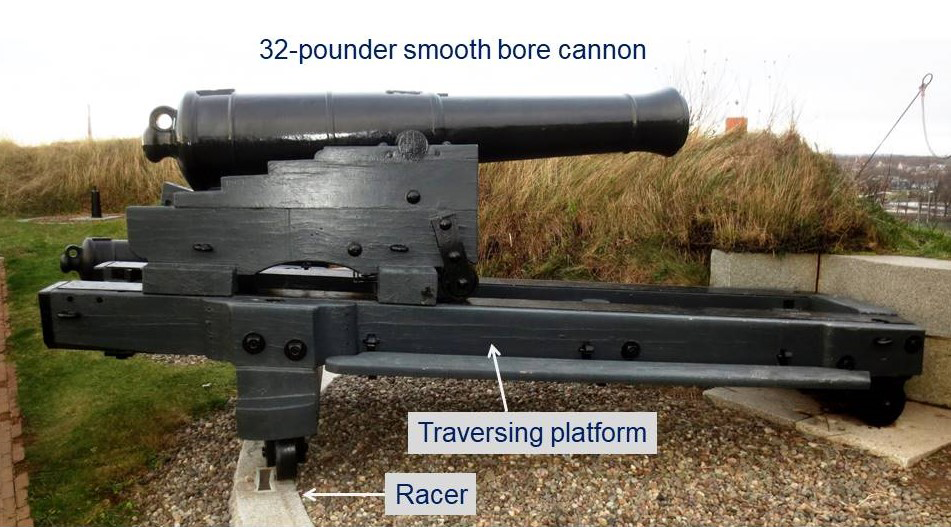 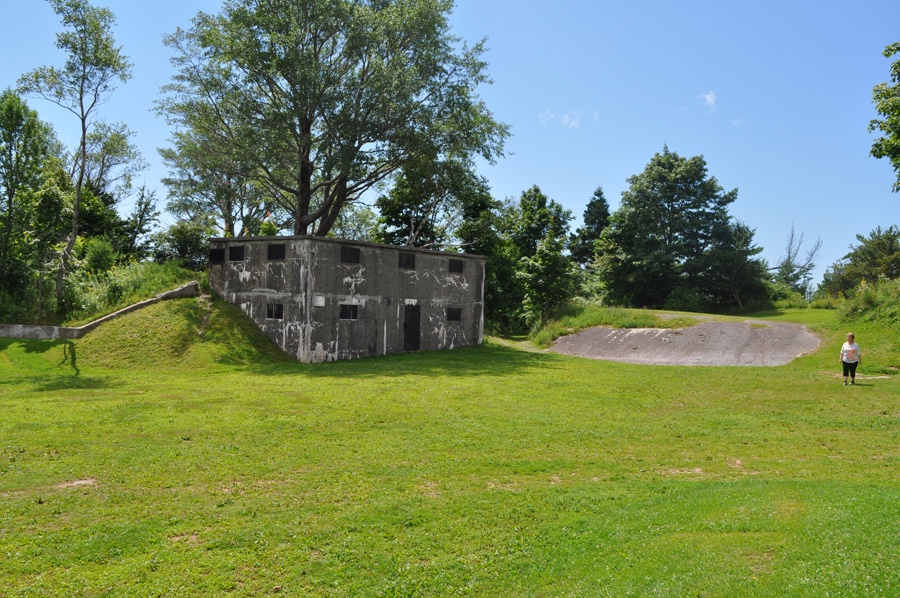 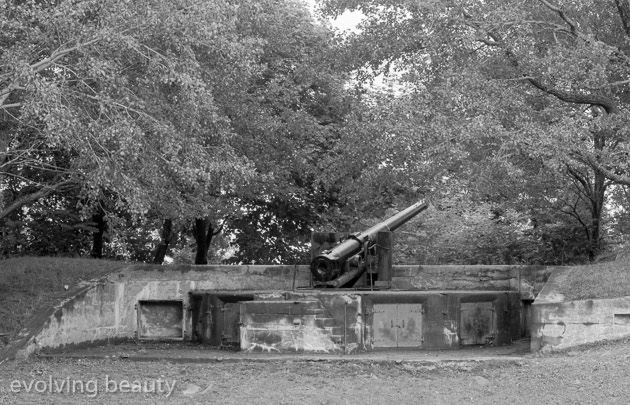 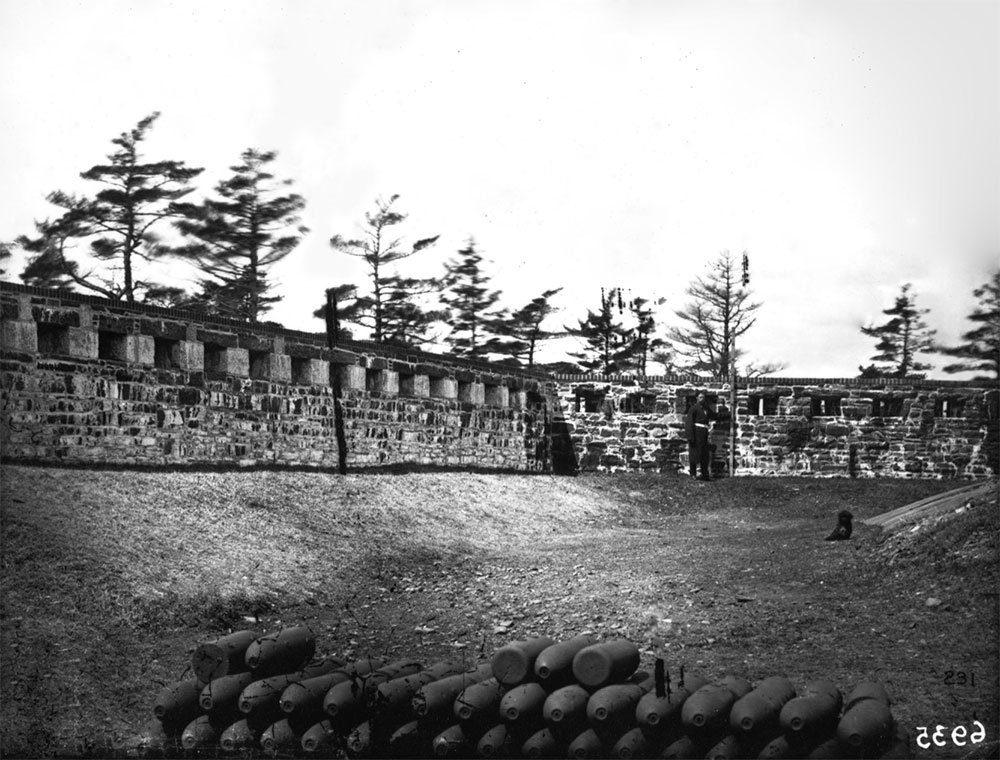 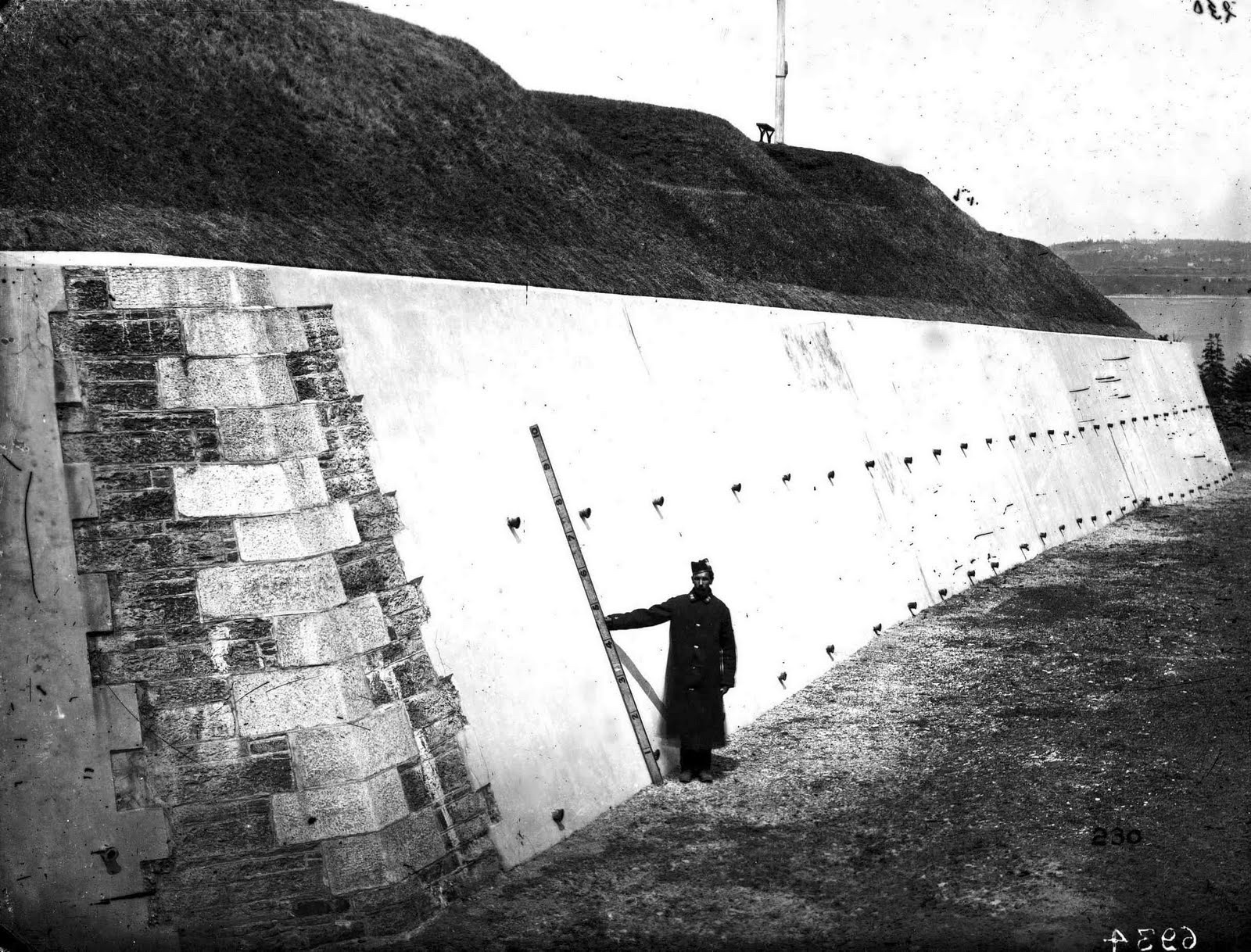 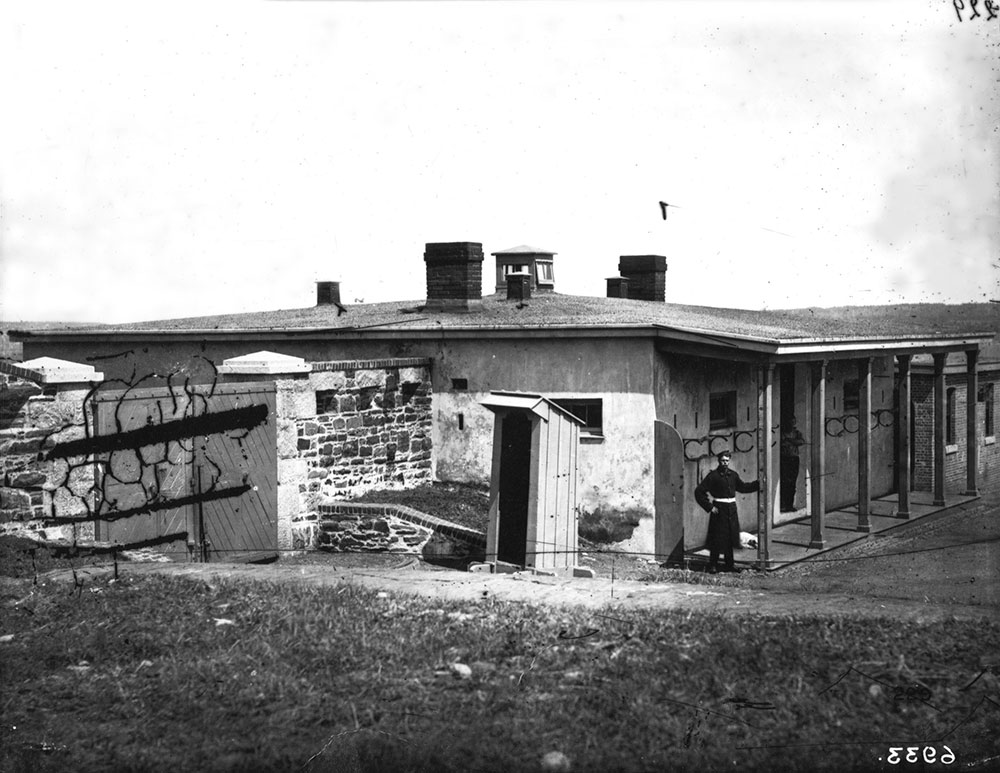 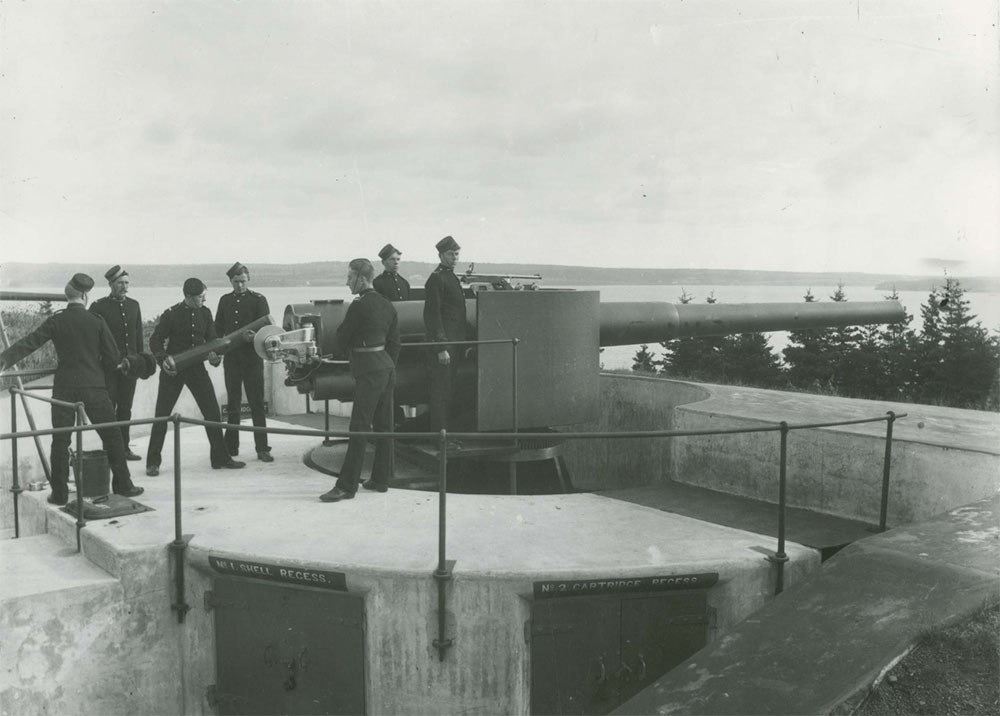 Britain again found itself at war with France in 1793 with the outbreak of the French Revolutionary Wars (1793 to 1802). This precipitated the construction of a number of additional fortifications to defend Halifax, the Royal Navy’s principal base in North America. Fort Ogilvie was erected during the summer of 1793 on a high promontory 70 feet above sea level, overlooking Black Rock Beach at Point Pleasant. Its purpose was to augment Point Pleasant Battery in defending the main channel entrance to the harbour.

The fort was named after Brigadier James Ogilvie, the British Commander-in-Chief of the Nova Scotia district from 1787 to 1794. Its initial design was as a masked barbette battery, with the guns firing over a raised parapet which also concealed them until they were brought into action. It consisted of a 130-foot long East-facing crescent-shaped earthen battery with an 80-foot straight extension on its left flank. Six 24-pounder smooth bore cannons were mounted on newly introduced traversing platforms, which featured a radial stone racer for the rear truck (wheels) of the carriage to run along, making traversing faster and offering a greater arc of fire. The guns had an effective range of about 1,200 yards, which covered out to about mid-channel. There was also a furnace for heating shot and a powder magazine, along with a guard house to the rear.

This armament remained more or less consistent until the end of the Napoleonic Wars and the War of 1812, in 1815. Over the subsequent three decades Fort Ogilvie fell into disrepair, as most of the funds and efforts earmarked for the defence of Halifax from 1829 to the 1850s went towards the reconstruction of the Citadel. By 1834 there were no serviceable cannons located at Fort Ogilvie; however it had regained six 24-pounders by 1852. These were upgraded to 32-pounders by 1861 amid deteriorating Anglo-American relations following an illegal British attempt to recruit volunteers in the United States for the Crimean War effort (1854-56).

Smooth bore cannon were rendered obsolete around 1859 by the introduction of guns with rifled or grooved barrels firing elongated Palliser shells, capable of greater range and improved accuracy. This development, along with advances in ironclad warships, rendered Fort Ogilvie and the other fortifications at Point Pleasant much more vulnerable to sea-borne attack and virtually obsolete in their existing state at that time. Fort Ogilvie was therefore extensively reconstructed and enlarged during the American Civil War of 1861-1865, with work ongoing until 1870. The new fort consisted of an irregular 4-faced lunette with a palisaded gorge similar in design to Cambridge Battery, which was built at the same time. The two main faces covered the main shipping channel to seaward and the harbour entrance towards McNab’s Island, while the left flank (the site of the old crescent battery) supported Fort Charlotte on George’s Island and the right flank was equipped with self-defence guns. The upgraded fort was armed with a battery of five new 9-inch/ 12-ton and five 7-inch/ 7-ton rifled muzzle-loading (RML) guns. The 9-inch guns, crewed by nine men each, had a maximum range of 5,500 yards (1,800 yards effective) with a 256-pound projectile and could penetrate 10 inches of wrought iron at 1,000 yards.

In 1890 an observing station was constructed at Fort Ogilvie for position finding apparatus associated with the anti-shipping minefield defences laid in the harbour entrance. This station can still be found today down the slope to the East of the walls of the fort.

Fort Ogilvie was again rebuilt around 1900 and rearmed with two modern 6-inch Mk VII rifled breech-loading (BL) guns. With a range of about 12,000 yards they could reach as far as Devil’s Island. Various barracks and mess facilities were built in the area just north of the fort. The Fort remained in use into World War II (1939-45) as a training battery, armed with two 4.7-inch guns. It ceased operation in 1942, the last fortification to have been active at Point Pleasant, and at that time most of the barracks and out buildings were demolished. Most of the original 1860's-era fort is now entombed under the present lawn and mounds, but the two 6-inch gun emplacements from the 20th century are still visible, as well as a couple of the granite 7-inch RML gun racers on the right flank. Two 7-inch/ 7-ton Mark I RMLs are currently displayed at Fort Ogilvie, along with a 10-inch/ 18-ton RML that would have been located at Cambridge Battery.